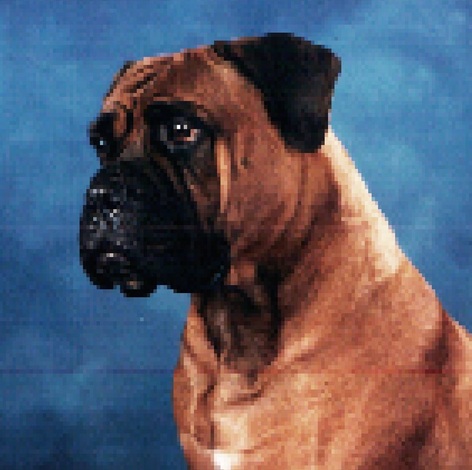 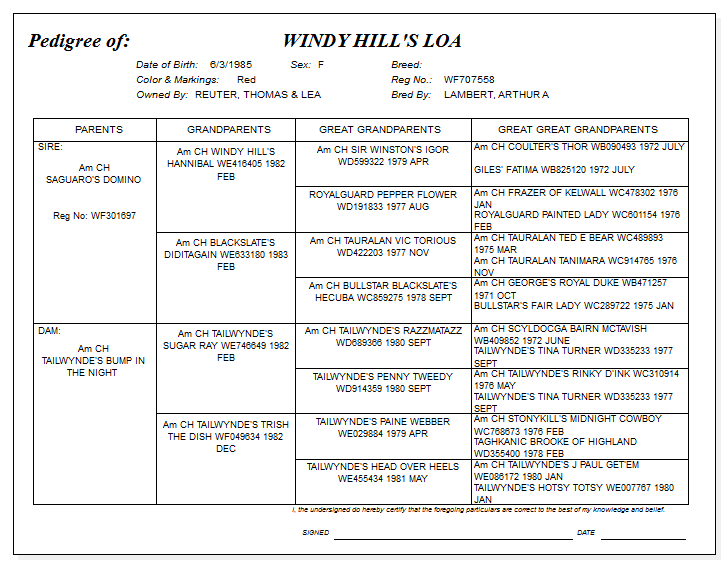 'Loa” was a deep red in color. She was out of a long line of champions but more important, a long line of OFA certified dogs and bitches.  Loa had 16 points, including one 4 point major but never completed her Championship due to some hard “hit and run” play with her first daughter which ruptured her right cruciate.  I had the cruciate repaired but she was never sound enouch on that right knee to show again.  We had also been working on getting her C.D. and Tracking title at that time but could not complete those either.  Loa had good dark masking, large dark eyes and the sweetest temperament which she did pass on to all her progeny.  Loa also had size and bone which she passed on to her get.  She also had an exceptional front which she passed on to all her children.  Loa’s faults were a weak topline, bite too undershot, but she covered (her underjaw was wide but lower teeth were irregular).  She was also mildly hocky with a narrow rear.  She did seem to dominate on throwing her too undershot bit to about 80 percent of her get, same with narrow rears to about 60 percent but toplines came out fairly decent on her pups.  Her first litter by Cyrus (which was also Cyrus’ first little and produced both their first Champion at the tender age of 9 1/2 months - Ch. Sound Off’s Abagail, BMF#726.  This litter was very consistent in their looks, very typey, bully heads, cobby, large ears, tended towards the short side in height,  but wide in body with great rears.  Bites were too undershot.  Movement was exceptional.  Masking was a little lacking.  This was a line breeding.  Loa’s second and last litter, an outcross breeding, did not quite have the consistency of her first little.  She produced larger bone and taller in height and a larger eye although a little lighter in color than I liked but not too light.  Again, no signs of hockiness in either litter, overall  decent toplines, excellent fronts, dark nails, but narrow rears dominated more in the second littler.  Loa always produced good eyes with no signs of entropion.  Overall, Loa produced better than she was with the exception of bites being undershot and in both litters we lost some of the dark masking probably due to the fact that both sires were light in masking.  Other than the ruptured cruciate, Loa enjoyed good health, was an excellent Mom, had big litters and tons of milk.  She did have uterine enteria so had to have c-sections both times.  One day with no warning symptons, I found Loa unable to stand up and her gums were extremely pale.  I took her to the Veterinarian and he ultra sounded her abdomen and discovered an extremely large mass growing off of her spleen and it also involved the liver.  It was cancerous.  I had her put to sleep in my arms on 05-25-93.
By Lea Reuter of Sound off Bullmstiffs