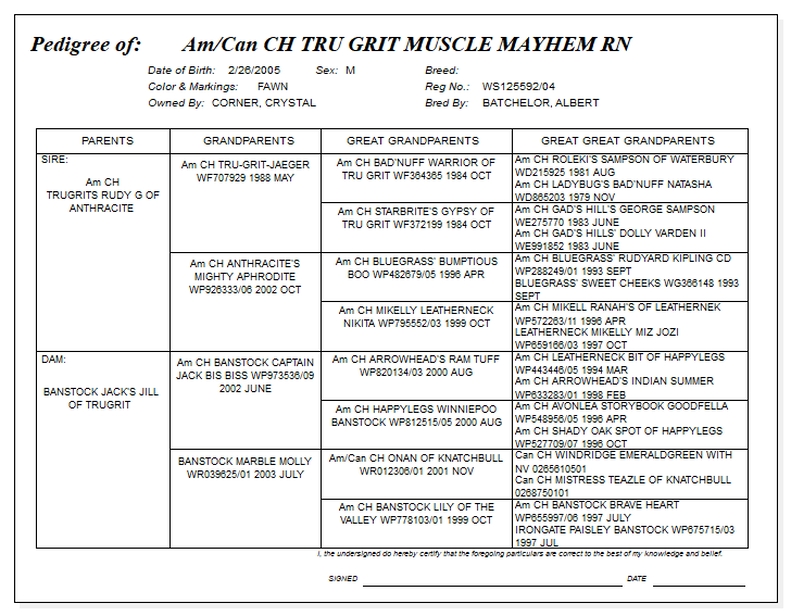 In 2008, he became a Canadian specialty winner, and a multiple group winner in both Canada and the United States. He then went on to win a Judges Award of Merit at the 2008 National Specialty under breeder Judge Sheila Polk, and Best of Breed at the 2008 Eukanuba National Championships in Long Beach CA. Primo retired at the end of 2009 the number one Bullmastiff in the Nation (breed rankings, ABA Top
20 rankings), our proudest accomplishment, handled by his loyal handler Katie Martin. Primo returned to the ring in 2010 for three weekends, winning all four days in Perry GA, including the SWBC Specialty at 5 years old. He defeated enough dogs in five breed wins in 2010 to finish the year ranked number 9 in the breed. At six years old, he returned to the ring for one day to win an Award of Merit under Bill Sahloff in March 2011, DVBC Specialty.
As a sire, Primo has passed his wonderful bone, pigment, reach of neck and exceptional movement tomany of his progeny. To date he has two national specialty award of merit receiving offspring, AM/CAN CH Danier’s Major General “General” (2009) and CH dal Primo’s Remember My Name “Fame” (2010), his double grandson “Tony”, CH dal Primo Race You to B’mew (General X Fame) was Best Puppy in Show at the 2010
ABA National Specialty under breeder Judge Billy Brittle who also awarded Primo Best in Maturity at the same National Specialty.
In only three litters, Primo has produced two specialty winning sons, “Fabio” AM/CAN/INTL GCH dal Primo’s In it to Win with TruGrit and “Blaine” GCH dal Primo Magic Moment. Fabio and General were both ranked in the top 20 for 2010, and General, Blaine and Fabio are all group placing Bullmastiffs. Primo is a true Bullmastiff in every sense of the word. He is an exceptional showman with truly wonderful
movement and un forgettable attitude. He stands at 26.5 inches and a solid 145 lbs, always in excellent natural muscle and condition with lovely bone and an excellent mouth. In his three litters Primo produced many of his strengths and very few of his weaknesses. We at dal Primo owe everything to this exceptional Bullmastiff, and to us, he will always be the dog with the “name that says it ALL”.