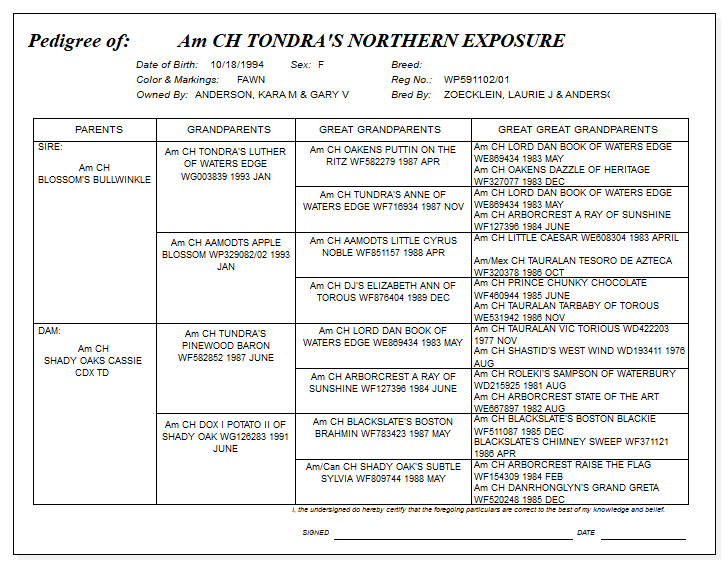 "Cicely" was Best in Sweeps at the 1995 National at 10 months of age, finished at 1 year with 4 majors, and was a group placer before 2 years of age.  When "Cicely" was not even 6 months of age my dad judged a sweepstakes in MI and put up this dog named "Beef".  From that day on we knew who she was going to be bred to.  It was a wonderful breeding that was done two times.  All 12 puppies from these breedings have become champions.  Some of her get includes CH Tondra's Here's The Beef "Angus", 1998 National Futurity winner, multiple sweepstakes winner, 1999 Number 1 bullmastiff all breed, 2000 Number 1 bullmastiff breed.  Angus has 3 All Breed Best In Shows and 6 Specialty Best of Breeds to date.  Also 2000 National Specialty Best of Breed winner and 4 time sweepstakes winner CH Tondra's Perfect Porter, 1999 Winners Dog CH Tondra's MGM Grand, 1998 National Specialty Winners Bitch CH Tondra's Tally It Up, Regional Specialty WD, Canadian National Specialty WD/BOW CH Tondra's Argus of Mainline.  This list just includes a few names of her wonderful puppies.  "Cicely" was the winner of the Brood bitch class at the 1999 and 2000 National Specialties.  "Cicely" was a very short backed bitch, she was 24 inches tall and 24 1/2 inches long.  She had a beautiful topline, front and rear, nice small ears and a very darling head with a very wide jaw.  She could have used some more bone.  She had a very silly personality and made you happy even in the worst of moods.  She was a princess in her own mind.  In October of 2000 I took her to work with me to be spayed.  This surgery was routine and went fine.  I was with her every minute but for some reason a few hours after the surgery we started to lose her.  Four good doctors and three technicians could not save her.  She was and always will be my favorite and will be missed forever.  I am very thankful I have her wonderul children to remember her by every day.
- Submitted by Kara Anderson-Gonzalez of Tondra Bullmastiffs
CH Tondra’s Northern Exposure
F, Fawn, DOB 10/18/1994, Reg # WP591102/01, SB 8/1997
Owner:  Kara M & Gary V Anderson;  Breeder:  Laurie J Zoecklein & Gary V Anderson
progeny for Tundra's Northern Exposure