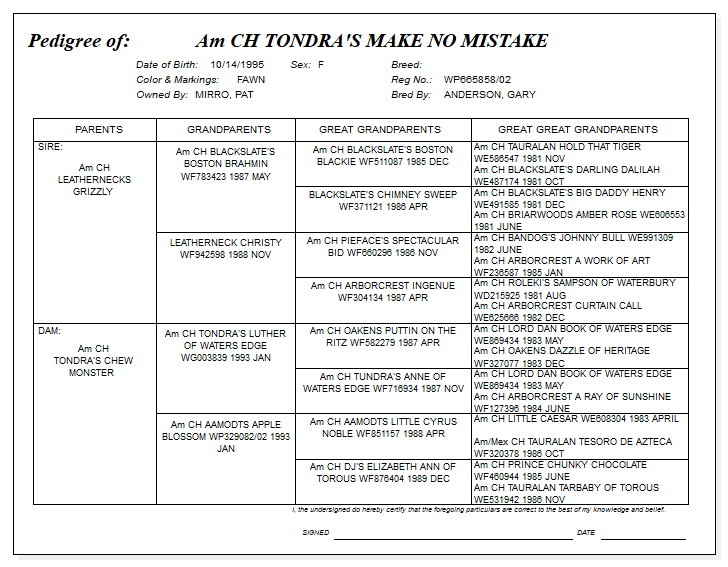 Beulah was purchased by Jodi McCaw from Gary Anderson and Kara Anderson as a puppy.
In 1997 Beulah won Best Puppy in Sweepstakes at the Nationals. She then had a litter of 10 puppies of which 1 became a Champion. She finished her Conformation title in 1998. She was then bred to Ch. Tondra’s Here’s The Beef which resulted in 5 puppies. Of these puppies, 2 became Champions and one of them obtained a Rally Advanced title. Beulah was then sold to Holly May. Holly then had Beulah’s OFA certifications completed; of which were Good – Hips, Clear – Thyroid and Elbows. She was then bred to Ch. Azar’s Vegas Don. This resulted in a litter of 9 puppies, with 4 becoming Champions, and one obtaining her Rally Novice Title. Beulah was then bred again to Ch. Azar’s Vegas Don and had 1 puppy that became a Champion and also obtained her Rally Novice title. Beulah was spayed after this puppy and became a lady of leisure.
Matt and Pat Mirro received Beulah to help Pat get over her fear of large dogs. Beulah was a sweet and gentle girl. She was the therapy that Pat needed to help with recuperation from an aggressive attack from her previous Bullmastiff.
Beulah produced beautiful puppies with outstanding temperaments. Beulah herself was quite stubborn at times. She had a very doggy head with a beautiful bite, very dark eyes, a broad top skull, and had great shoulder angles with a deep broad chest. Beulah had a level top line, even when she won the Midwest Specialty Veterans class at the age of eight.
By: Matt & Pat Mirro and Holly May
Progeny points: 9, 8 conformation, 1 working title, 3 rally novice  Status: Bronze, awarded 2006
Breeder: Gary Anderson  Owner: Pat and Matthew Mirro
Born: Oct 14 1995 Died: Feb. 7 2005
AKC# WP665858/02   Sex: Female  Color: Fawn Height: 25 in Weight: 118 pounds
clearances: BMF-2432G58F-T; BMF-EL637F58-T; BMF-TH59/76F-PI
Sire:  CH Larlins Spit N Image  Whelped:  4/5/1997    Litter # WP773735
Mojo’s Sweet Home Chicago (01) M  Red
CH Mojo The Sky Is Crying  (03)   F   Fawn  (Flynn & McCaw)
Chakotay Jake  (05)  M  Fawn
Beasty Boy Buck (08) M  Fawn
Mojo’s Noble Giant (09  M  Fawn