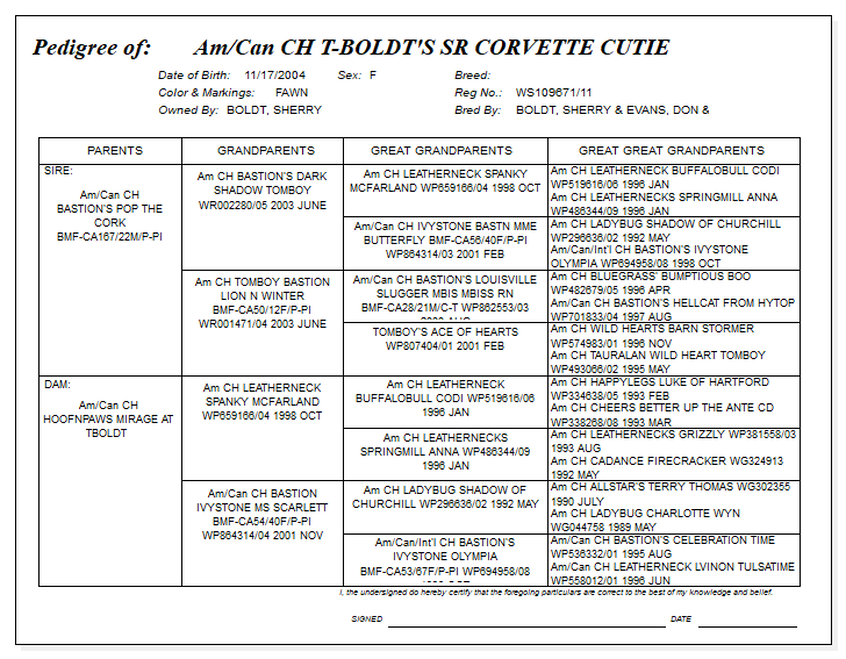 ​CC holds a very special place in my heart. She was one of the five girls and ten boys in a litter that I co-bred. Her mother, Mira, was a Best Bitch in Futurity winner at a National Specialty. CC hit the ground running in the show ring finishing both her AKC and Canadian Kennel Club championships in short order. She is a dream to show – she loves being in the ring and it shows. She has won multiple Award of Merits at National Specialties, and Best of Opposite at the Canadian National Specialty, multiple group placements, and Regional Sweepstakes BOS. She was awarded Best Veteran Bitch at the 2012 Nationals. She is equally talented in the whelping box as the show ring. Although it took numerous times to finally get her pregnant, when it did happen, she was an extraordinary mother. CC was awarded the Best Brood Bitch at the 2010 US Nationals. She took exceptional care of her puppies and now her grandpups, Cat and Marla. Her daughter Halle was Best Puppy at the CKC National at the age of 6 months and went on to take Best Bred By and Reserve Winners Bitch at the US Nationals at the age of one year. 2011 was an amazing year for Halle as she won BOS at the US National, Canadian National, and Eukanuba Invitational. Several of CC’s kids are stars in the show ring and her daughter Jackie is a star in the working ring performing in agility, rally, and obedience – she will be one to watch in the future. Her daughters Witchy, Halle, Lulu, and Jenny have proven themselves by providing CC some exceptional grandpups.

CC is now a veteran and is retired from the whelping box but still enjoys being in the show ring. CC and her daughter Halle sleep with me every night. She is truly one of the loves of my life. She has enriched my life beyond measure. She will always be known for the intimidating stare she gives – whether that is to judges saying “point at me” or to anyone attempting to molest one of her puppies – the “step away from the puppy and no one will get hurt” look. She may be finer boned and at the bottom of the standard in height, but she is very capable of taking down an intruder and continues to look for that opportunity. CC was diagnosed with a pituitary tumor in November, 2012 but through exceptional veterinary care and lots of love, she is still winning her battle
progeny for Am/Can CH T-Boldt’s SR Corvette Cutie