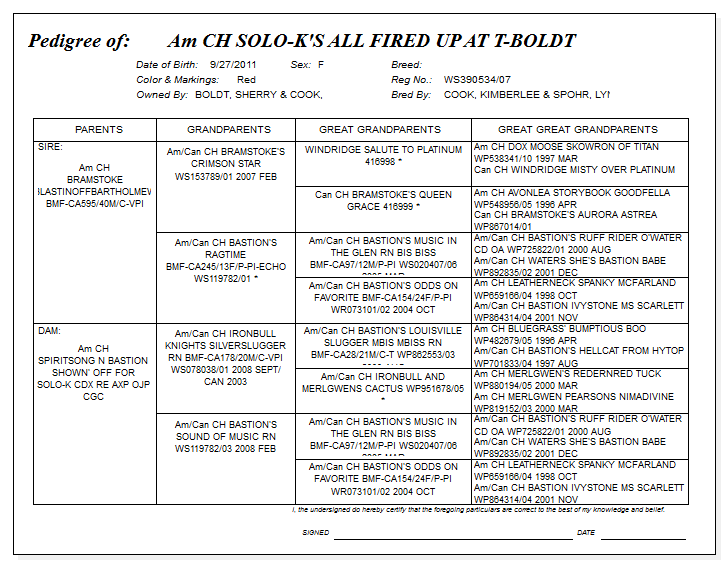 Phoebe was a cute cuddly red puppy with a mind of her own. She quickly grew into a beautiful young bully girl with exceptional structure and movement to match. She has a more moderate headpiece than some of her beautiful sisters, but still a very pleasing headpiece. She finished her AKC championship quickly and then retired to guard the sofa for a while. After obtaining all her health clearances, we decided to find the right mate for her and see if she would follow in her mother’s paw prints as an excellent mother. Kim Cook was instrumental in choosing that first mate for her and worked with the outstanding Librrani kennel to ship in frozen semen from Alonso ((BISS BIS CIB NORD BALT FI DK SE NO EE LV LT HR BY RU RU Gr RO Gr CH Librrani’s High Performance Alonso). Phoebe and Alonzo blessed us with eight beautiful puppies – four boys and four girls. Seven of the eight puppies went to show homes and six of those finished their AKC championships with three going on to Grand championships so far. Kim developed the working talent in the girl she kept (Prada) and the Prada/Kim team continue to amaze us racking up those working titles while completing her Grand championship as well. The entire litter turned out beautifully – handsome boys and beautiful girls – but even better than talented show and performance dogs, they are all loved and treasured home companions. We tragically lost one of the beautiful boys, Henley, to an unexplained death when he was still young but he had already achieved ten points toward his AKC championship. Phoebe’s daughter Iggy won Best Bitch in Futurity at the 2015 ABA National Specialty. Phoebe’s son Marshall won Best in Show Specialty at the Delaware Valley Bullmastiff Regional Specialty in March 2017 as well as winning multiple Owner Handled Best In Shows and multiple OH and regular group placements. Marshall ended up ranking #4 in the ABA top 25 as well as #1 Owner Handled ABA bullmastiff in 2017. Phoebe was an exceptional mother taking extremely good care of these eight puppies. Motherhood was what she was born to do.


We decided to breed Phoebe one more time, and Kim and I choose a beautiful  red Canadian boy, AM/CAN CH Knatchbull’s 5th Avenue Marquee (Marquee), for this second and final litter. Phoebe/Marquee blessed us with nine puppies, four girls and five boys. Phoebe was once again an exceptional mother taking great care of her puppies and enjoying all the extra food that pregnancy allowed her to have. Unfortunately complications with the healing of her C-Section lead us to spaying her when the puppies were only two weeks old so the puppies received even more human interaction and attention while being bottled fed. Once again the puppies grew into exceptional bullmastiffs – six of them have already completed their AKC championships. One boy, Woodford, the pick of the litter, won Best in Sweeps and Best Dog in Futurity at the 2016 ABA National Specialty. Two of the Phoebe daughters, Kimber and Fendi, are shining stars, along with their owners Kim Cook and Tracy Jones, in both the conformation and working rings. Fendi won Best in Sweeps at the Midwest Regional Specialty in February 2017, Best Of Opposite in Sweeps at Delaware Valley Regional Specialty in 2017 and has started her performance career with Rally & agility titles already.  Kimber and Tracy are the over- achievers accomplishing a Tracking Dog title (TD), CD in obedience, and Novice agility titles in a 3 month span to become the youngest bullmastiff to achieve an AKC Versatile Companion Dog Title (VCD-1) Level 1, along with Rally and FAST CAT titles.  These two girls are both well on there way to many more titles in their futures.
​

We could not have asked for any better results from these two breedings. Phoebe’s sweet temperament, hard-headedness, beautiful structure and movement, combined with the wonderful traits from the Librrani and Knatchbull kennels have resulted in extremely talented puppies who will help continue to build and enhance the kennels of T-Boldt, Solo-K, and Bastion. Phoebe earned her retirement and she is currently an only dog being spoiled and loved by Brandon and Karen Schuessel. Boy does she have them wrapped around her beautiful red paw!