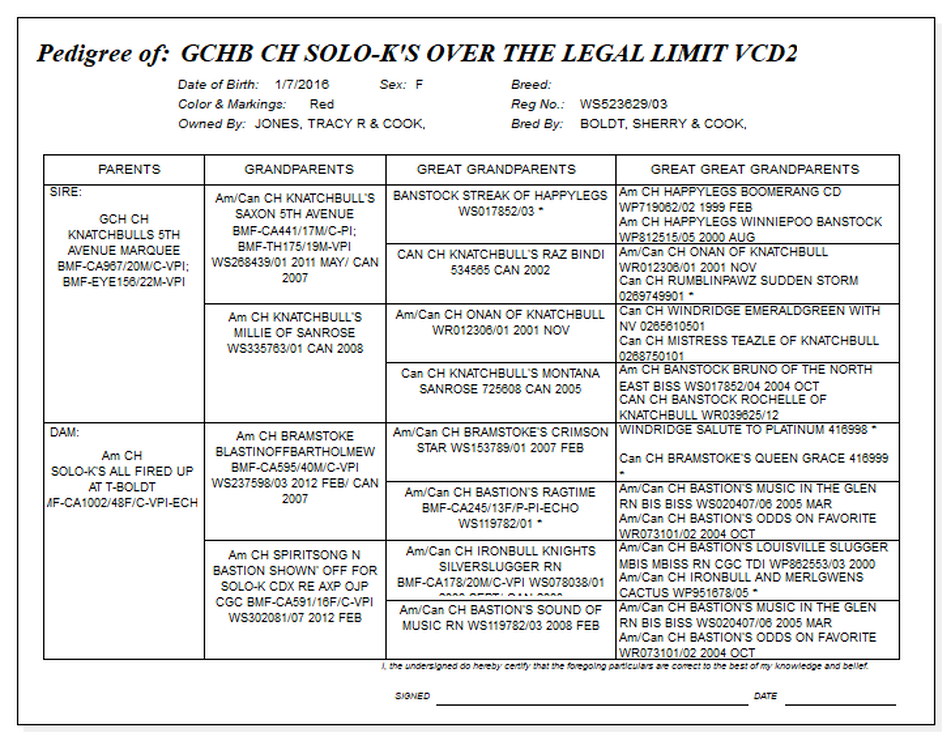 After doing rally, agility & obedience with Dora, my older girl, I was looking for a Bullmastiff puppy that was a prospect for both performance and conformation and contacted Kim Cook of Solo-K Bullmastiffs. My new prospect was Kimber, bred by Sherry Boldt, Kimberlee Cook and Lynn Spohr. Kimber was one of 9 puppies in the litter by “Marquee” - MBISS BIS Am/Cdn GCH Knatchbulls 5th Avenue Marquee GROM and out of “Phoebe” - CH Solo-K’s All Fired Up at T-Boldt GROM.  Kim selected for me the pick puppy from that litter. Once this pretty red girl was in my home I chose to name her Kimber after Kimber Firearms because she was such a pistol!! Co-owners Kim and Sherry showed her through her Championship while I watched, learned & pitched in as a bucket bitch. Kimber was my introduction to the conformation world and she has exceeded all of my expectations. She easily attained her GCH/GCHB with multiple Group placements being expertly handled by Debbie Coggin as well as some owner handled showing by myself.

Kimber has been a wonderful performance bitch with great drive & loves to have a job to do! She became the youngest VCD2 in the breed and is the only bullmastiff to achieve the TDU-Tracking Dog Urban title to date. Kimber had an extended period off after whelping her litter of eight puppies. But she returned to competition with a bang at the the 2019  ABA National Specialty to win the Gold Triathlon, High In Trial Agility and High Scoring Champion of Record in Obedience. She has excelled at anything I put in front of her! Thank Kim for selecting Kimber for me!

‘Boomer’ - BISS CH Hoof N Paw's Booming Jackpot was selected for a fall 2018 breeding with Kimber.  Sherry & Kim decided to go back in time by choosing him as a stud dog & a loose line breeding. Boomer was selected to help solidify a wider under jaw, shorten up backs & improve head pieces while keeping a solid temperament.

Boomer was bred by Deb & Jim McFarland and Lynn & Bob Spohr. He obtained a 3 point major his first time in the ring at 6 months of age, winning multiple Best of Breeds before finishing his Championship at 9 months old.  He was owned by Jeff and Barb Netherton (BNB Bullmastiffs) & Deb McFarland. Boomer was novice owner handled by Barb until obtaining his Championship and then breeder handled by Deb as a Special. He went on to win several group placements and BISS at the 2004 Southwest Speciality Show in Ft. Worth, Texas. He was ranked in the top 20 before the age of 2 years and attracted constant attention due to his beautiful head piece, square build and outstanding temperament.  Boomer retired at the age of 3 to become a loving family companion.

Kimber has continued a tradition by being a 6th generation consecutive ROM status bitch in her maternal line. Kimber earned Copper ROM with these puppies being her only litter. She produced 4 finished Champions along with some major accomplishments well before the puppies turned 2 years old:

2.   Best In Sweepstakes Winner & Award Of Merit at The 2020 Delaware Valley Bullmastiff Club Regional Specialty -
CH T-Boldt's Read All About It “Rufus”

All of the show puppies have been tested and have great PennHip/OFA Prelim scores, Echo Cardiograms and CERF eye certifications. We could not be prouder with the quality of the this litter and the exceptional conformation & performance bullmastiffs it has produced.