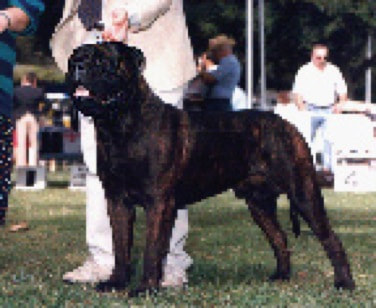 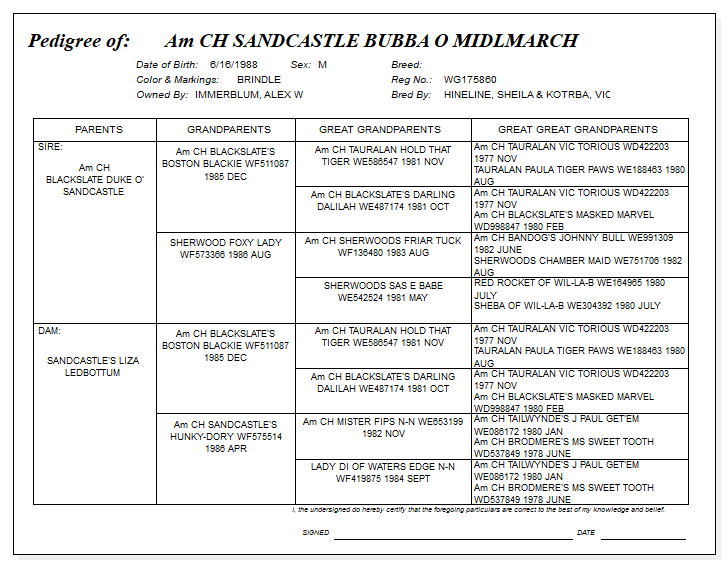 Breeder: Sheila Hineline & Vicki Kotrba.   Owner: Alex Immerblum
Born: 06-16-1988   SB: 6-90.  AKC# WG175860  Color: Red Brindle
OFA # 742G. EL-13
“Bubba” has been and remains the most wonderful dog I have ever owned. He is a gentle giant. He was an extraordinary stud dog. His nose was impeccable. He knew just when a bitch should be bred and would have nothing to do with one unless the moment was right, no matter how coquettish they were. He could bred naturally in his day and often quickly.  Bubba is popular as a stud dog for two reasons: his brindling and his head. Few brindles posses this rich dark striping against a red background. And few Bullmas­tiffs have such correct head type: a square, large head combined with a very square short muzzle. he has good bone, dark clear eyes and dark pigment. Though sound, he was not a correct moving dog. He tended to paddle in the front and crab in the rear.
For the most part, Bubba could not correct a bitch’s average head, certainly if the breeding was an out cross, and of course this is the mistake many breeders make when they have an average bitch with an average head--they seek a male that will correct ev­erything and that usually doesn’t happen. Bubba had adequate angulation and did well when bred to bitches with the same or better angulation. He possesses a sturdy level topline, which he could pass on to his get, and a strong immune system. Occasionally he would pass along more black overlay than I like, but this you would expect from his tight pedigree back to Blackslate and Chimney Sweep. Rarely did he throw a pup with poor pigment or even excessive white.
Some breeders have been unfairly critical of his aggressive temperament. it is true that Bubba disliked  other males and at shows I had to keep a firm grip on him or he would lunge at other dogs. However, Bubba was never viscous. In his nine years he has never attacked anyone. Quite frankly I think he possesses the perfect Bullmastiff tempera­ment.
I have been asked to list all of Bubba’s get and the names of their owners, this will be an impossible task. I apologize to those who of you who own a Bubba son or Daugh­ter who will go unrecognized, but there are too many of you and the task is not one I can complete within the time limit I have before me.
By Alex Immerblum of Middlemarch Bullmas­tiffs
dam: Ch. Praetorian Believe it or Not Whelped: 1-10-1990
Praetorian Gummie Bear CD   OFA# 865G, (D), Red  (Forster)
CH. Praetorian Murphy’s Law OFA# 835E, (B), Red (Loberg)
CH. Praetorian Precious Trinket   OFA# 859G, (B), Fawn (Loberg) 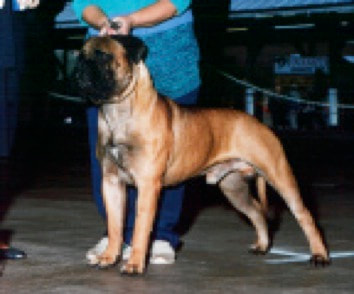