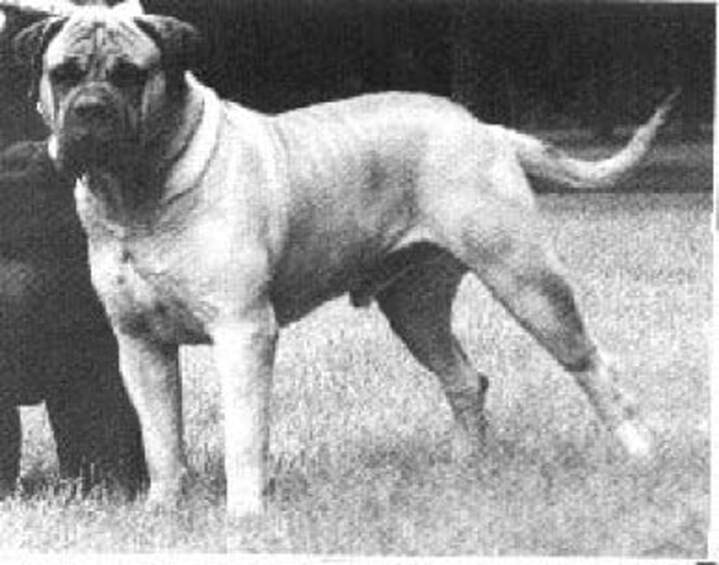 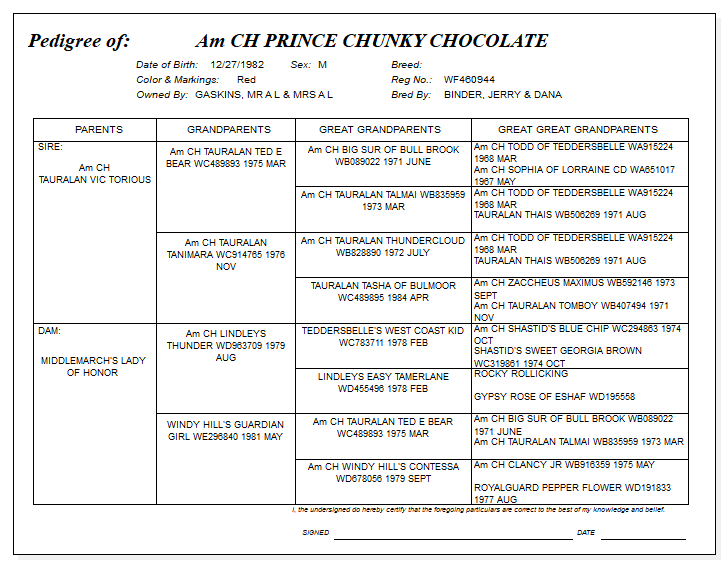 We were the third and last of “Chunky’s” owners.  I had shown and finished him for the second owner, and when he had to be placed, he came to us.  He was three years old at the time.  He was a very intelligent but stubborn dog who was extremely dog aggressive.  He had a very handsome head and expression, dark pigmentation and large bone.  His type and movement along with his deep mahogany red color won him many admirers during his show and breeding career.  He did tend to toe out in the front, especially when he was younger, and his topline wasn’t the best.  He had a good run at the shows with a Specialty and Group placements under his belt, even though he hated it.  He only sired nine litters with a total of eighty living pups.  Nineteen of his “get” became Champions, there are more still being shown.  One of his litters was a near record size of eighteen.  He has two Group winning offspring, two Companion Dogs and two Mexican-International Champions to his credit.  One daughter is a ROM and another is almost there.  Chunky was gently laid to rest at 7 years and 4 mos of age, only four short years after he came to live with us.  Numerous tests never revealed his illness.  What was once a robust 27 inch, 145 pound dog became a weak 90 pounds in a matter of weeks.  Even though he had no appetite, he remained bright eyed, alert and enjoyed his last few days on his bed in our dining room as our pampered pet.  We were very fortunate to have Chunky enrich both our breeding program and our lives.
By Terry Gaskins of Upper Crust Bullmastiffs
progeny points, 20, 19 confirmation , 1 working
​Breeder: Jerry & Dana Binder
Owner: Nanette Gaskins & Terry Aamodt
Born:  12-27-1982. Died:  1989. SB: 6-85.  AKC # WF460944
Sex: Male  Color: Red. Height: 27 in. Weight: 145 lbs    OFA # 514
Dam; Ch. Tauralan Triga de Azteca Whelped: 02-18-1985
CH. Upper Crust’s Double Delite  (B), Fawn (Gaskins)
CH. Tauralan Turkish Delight   OFA# 640 (B), R.Fawn (Beans)
CH. Upper Crust’s Charter Member  (D), Fawn (Talley)
CH. Upper Crust’s Sudden Impact  (D), Red (Anderson)