Fun loving, energetic and game for anything. That is Saxon’s approach to life and what makes him such a special stud dog, show dog and most importantly a special friend who has captured my heart. Bred by Helene Hansmann of Knatchbull kennels, from the time he came home as an 8 week old puppy he was a busy going concern who was destined to be something special. His exuberant, bomb proof stable temperament yet sweet and willing nature make him the ideal show dog, working dog and companion.


Always owner handled and with very limited showing, Saxon obtained each of his 3 conformation titles in a limited number of shows and with major wins. He is a multiple Breed winner on both sides of the border, a group winner and multiple group placer in Canada, and was in the top 10 Bullmastiffs in Canada in 2009 and 2010. In his only 2 appearances thus far at the ABA Nationals, in 2010 he made it all the way to the final BOB judging and was 3rd in the Stud Dog Class . In 2011, Saxon made the initial select cut in the Specials Class and was again 3rd in the Stud Dog Class.


Saxon’s signature trade mark head piece is substantial, yet clean and classic and is accented by an abundance of striking black pigment. Very distinctive in the show ring, his rich deep red fawn colour sets off an athletic 267/8 inch tall square body comprised of a strong level topline with short back, good bone and good length of leg. Saxon has an exceptional chest and front end assembly coupled with moderate rear angel  which enables him to be a powerhouse mover with ground covering reach and drive. If  I could change one thing about him, it would be to balance out his hind quarters a bit more to better match his strong impressive front end.


Regardless of line breedings or outcrossings, Saxon consistently puts his stamp on his offspring, passing on the best of himself while allowing the best of the dam to shine through, the hallmark of a great stud dog. He repeatedly passes on that distinctive strong head piece, short back with level topline, good movement, rich coat colour and pigment, and outgoing friendly stable temperaments. 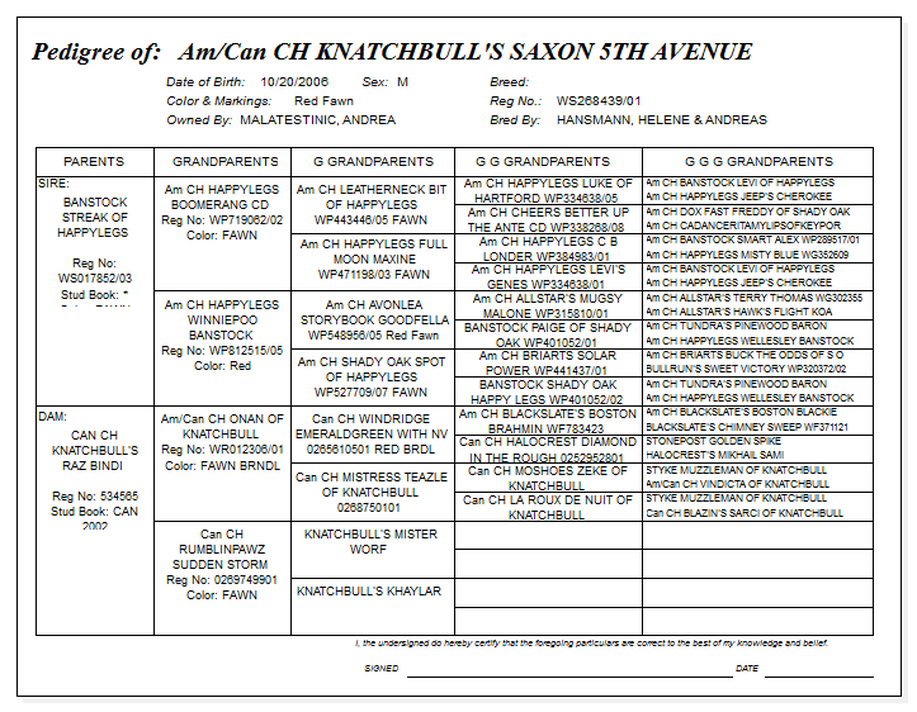