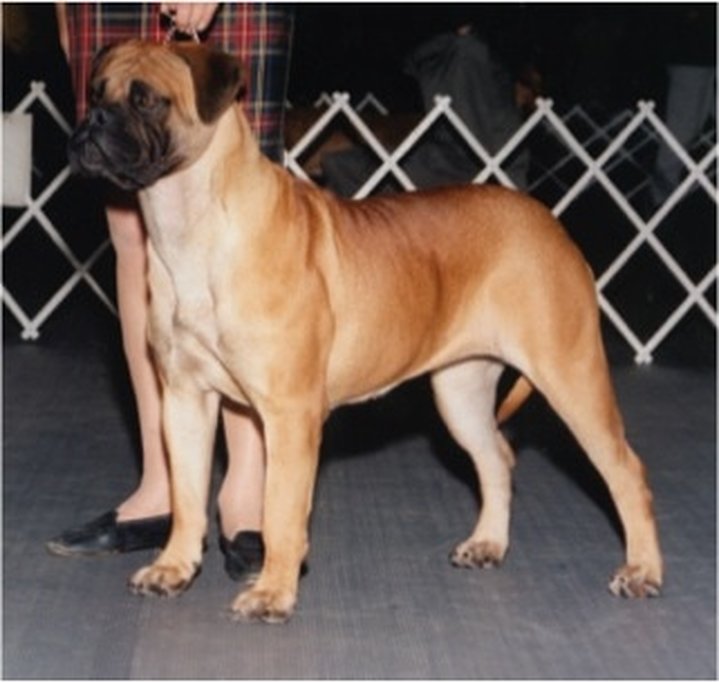 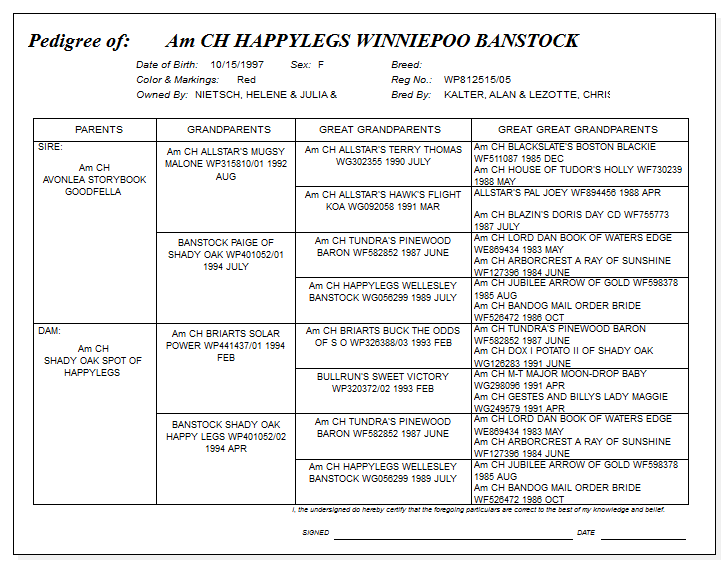 Winnie was a short bitch, but a very substantial one. Although probably not even 23”, Winnie was about 110 pounds, with tremendous bone and substance, depth and breadth of body. She had a dead level topline, great shoulders and a fabulous rear, using her moderate angulation moving with good reach and drive. Winnie was a rich red color, with great pigment, black nails and a light brown eye; her bite was very tight. Her temperament was wonderful: mischievous, playful, non-dog aggressive, and protective of her property, and particularly her food! Chris explained that she had to tube feed Winnie for three weeks, hard to believe since she was a definite “foodie” and never skipped a meal! Where I would improve Winnie would be to lengthen her legs one inch. However, she seemed not to pass on this quality to her progeny, with the pups growing to very good size and good length of leg. Winnie’s first litter of 11 sired by Ch. Arrowhead’s Ram Tuff (9 lived) started naturally, but ended up in the emergency room, delivering the last few puppies by csection
on May 7, 2000. The litter of 3 boys and 6 girls had exceptional quality.

Although Winnie did not have a lot of milk, she was an attentive mother and loved her puppies. All the puppies were clear-coated reds or biscuit fawns with great pigment, temperament, and some outstanding qualities. The first one to finish, at age 10 months, “Jack,” was placing in the working group by 12 months, receiving awards of merit at the 2001 ABA National, GNYBF specialty and Westminster. Jack won both specialties at the Connecticut River Working Group shows supported by GNYBF two years in a row, and was #2 Bullmastiff all systems. The second one to finish, “Neesha,” was Winners Bitch, Best Bred by Exhibitor and an Award of Merit winner at the 2001 ABA National, and WB at the New England Bullmastiff Specialty. Soon to follow were Polly, Abby, Paesano, Jazz and Slim. Although none of her get was perfect, this was perhaps one of the best litters I’ve bred, each dog shown possessing some outstanding qualities
and few serious faults.

Winnie whelped her second litter on September 9, 2002 of 3 bitches and 7 dogs sired by Ch. HappyLegs Boomerang CD. This litter turned out to be an equally impressive litter, finishing Max, Bruno, Gwen and Trey. Contributing to the Bullmastiff gene pool worldwide is Ch. Banstock Bruno of the Northeast, who to this date is still siring litters in this country and around the world. Bruno may very well be the biggest influence to pedigrees in the last ten years, passing on his beautiful head and pigment, great angles, bone, substance and temperament. There is no doubt when you see one of his get his type has been stamped without a doubt, and in many I see Winnie’s face. Bruno was a nine-time group winner, multiple specialty winner and AOM at the ABA National. Mention also must be made to Winnie’s Canadian son, Streak, who was bred successfully in Canadian bloodlines. At one of the ABA Top Twenty events, I noted that
nine of the top twenty competitors went back to Winnie’s three sons, Jack, Bruno and Streak!  Attempts were made to breed Winnie for a third time; however it seemed that she only wanted to conceive in her birthplace of Michigan with Chris and Alan!

Winnie lived to the ripe old age of 12 (not of cancer but old age,) the oldest bullmastiff I have ever had. Her presence in my household will be missed forever. She was the best “pet” I could ever own; her character, whimsical nature and her love of people and her housemates (including my cats) is unsurpassed. Chris, Alan, Julie and I are extremely proud of Winnie’s accomplishments, but most of all of the Bullmastiff she became.
​
Submitted by Helene Nietsch ~ Banstock Bullmastiffs
Breeder: Chris Lezotte & Alan Kalter
Owner: Helene & Julie Nietsch & Chris Lezotte & Alan Kalter
​