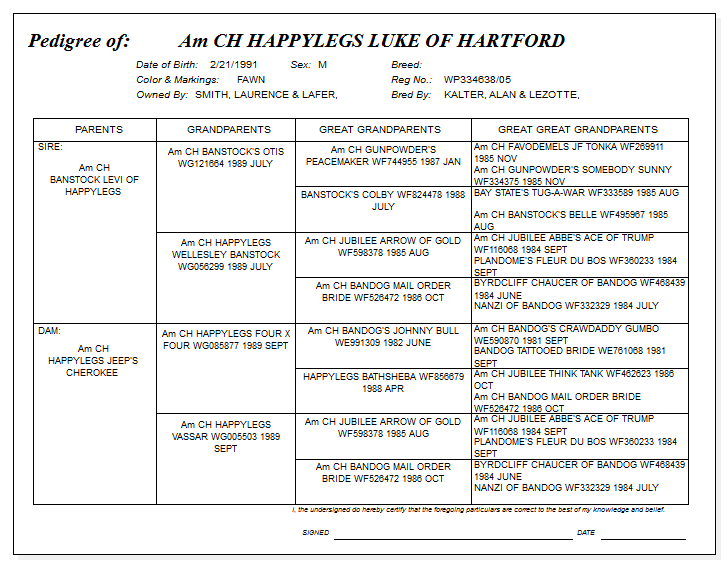 “Luke” was an unremarkable puppy when we sold him at eight weeks of age. When we saw him again at 10 months, we realized we had sold an exceptional dog, the best we had bred up to that point. Although Luke’s ownership prevented us from showing him and breeding
him other than on a very limited basis (he was neutered at four years of age), his record in both areas is impressive nonetheless. Luke finished his championship in four straight shows, and in one and a half years of limited showing, was a multiple Best in Sweepstakes winner, a Specialty Best of Breed winner (at 15 months of age), Specialty Best of Opposite winner, multiple National Specialty Award of Merit winner, Group winner, Westminster Award of Merit winner, and was nationally ranked in both breed and all-breed systems in 1992 & 1993.
As a stud dog, all eight get from one litter finished, of which three received Group Placements by 18 months of age, and one son, Ch. Leatherneck Bit of HappyLegs, won an all-breed Best in Show at just 20 months of age and was the number one Bullmastiff, in both breed and all breed, in 1994..
Luke was a moderate dog in every respect, with a short, straight back and beautiful front and rear. If I were to fault him, it would be that he could have used a little more reach and drive. In his prime, Luke was 26” and 132 lbs. He was OFA Good.