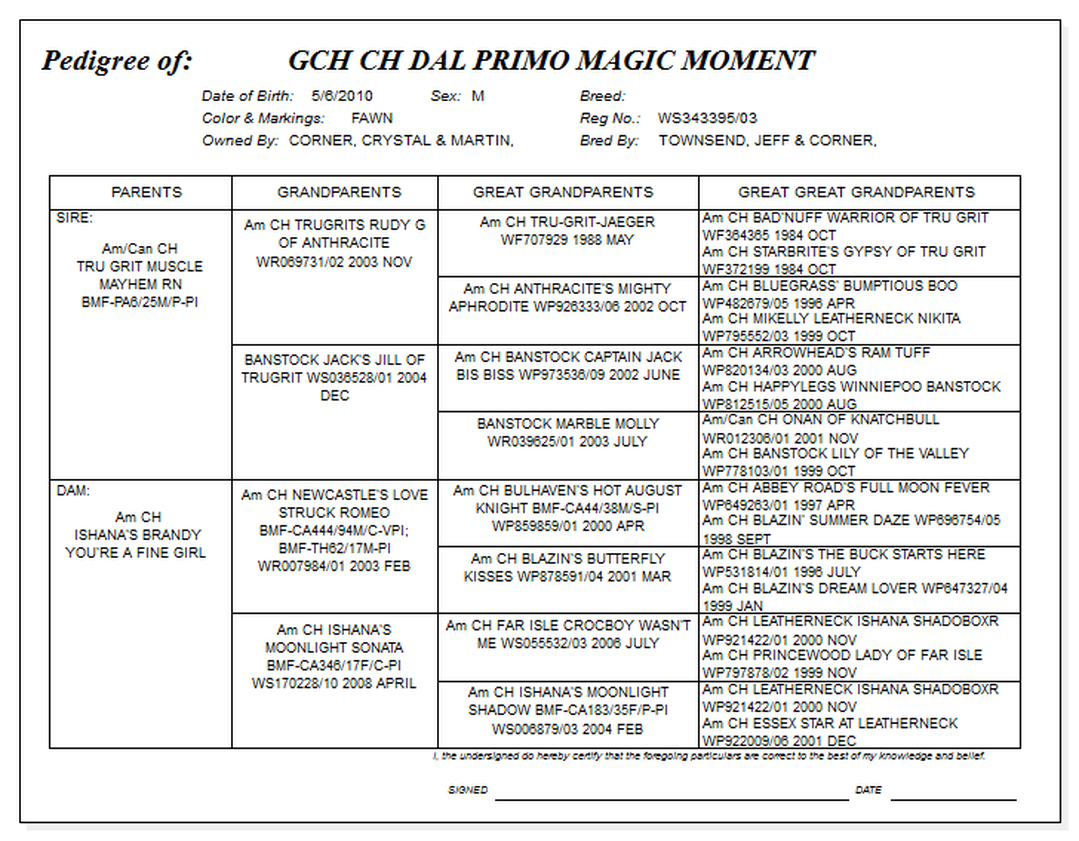 Blaine is from the last litter sired by our beloved Primo, 2011 National Specialty Winner and Best Veteran, MBISS AM/CAN CH Tru Grit Muscle Mayhem RN CROM. Blaine’s dam is CH Ishana’s Brandy You’re a Fine Girl. As a show dog Blaine has exceeded our every expectation in- side and outside of the ring. In three years Blaine has racked up an impressive record: Two time Eukanuba Best of Breed Winner (‘12 and ‘13), Two time ABA Top 25 Winner (‘12 and ‘13), Winner of Two Best in Shows, Winner of Five Reserve Best in Shows, Winner of 18 Group Ones, and the Winner of Six Regional Specialties. Blaine was the #1 Bullmastiff All Systems in 2014, and as of September 2014, Blaine is the current #1 Bullmastiff in Breed Rankings.

Blaine LOVES to show, this is evident every time he steps in the ring. He and his handler Katie Martin have never disappointed their fans and friends. You can always find people smiling ringside when Blaine is in the ring! As a Stud Dog, Blaine has sired a handful litters, the youngest of the 5 litters being just 13 months at the time this was written. Blaine has sired 7 AKC Champions and 3 more are pointed or major pointed. Bred to CH dal Primo Viva Toronto, “Tune” he sired a litter of 4 dogs and 1 bitch. In this litter alone, two are Specialty winners, one is a multiple Specialty winner, two are
group winners, three are multiple group placers, and three are invited to the 2014 ABA Top 25. The only bitch in this litter finished her championship with a 5 point major at the GLBA Supported Entry in Canfield, under breeder Judge Vicki Allenbrand, and her next weekend in the ring went Best of Opposite Sex at the 2013 Pre National SSBC Independent
Specialty under Judge Paula Nykiel. His son, Oliver from his third litter, alongside his owner Krissy O’Brien, went on to win Best Junior Handler over an entry of nearly 100 talented Juniors at the prestigious 2014 Westminster Kennel Club Dog Show.

As of September 2014 Blaine has 5 sons in the AKC Top 25, all five dogs being multiple breed winners and multiple group placers. Blaine is a CHIC dog, and was the first Bullmastiff in History to be invited as the OFA Champion of Health. As a companion Blaine is loyal, sweet and funny. Blaine loves his stuffed animals, and will carry them anywhere, especially his “Hedgie.” He will steal clothes from your suitcase, he will steal your shoes when you aren’t looking, most of all Blaine will steal your heart!
​