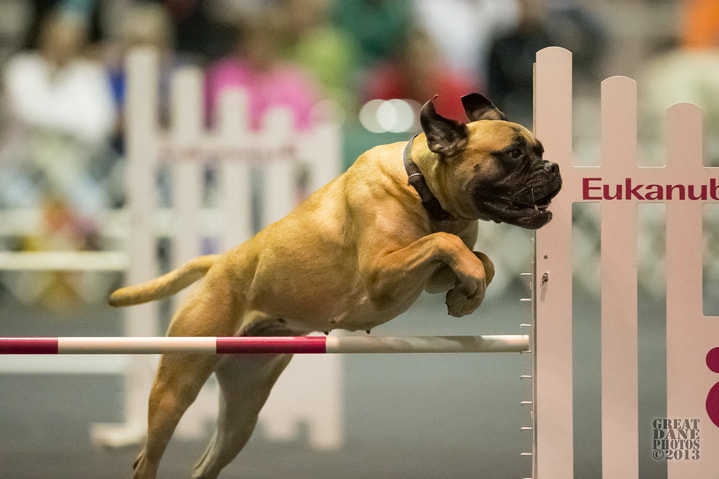 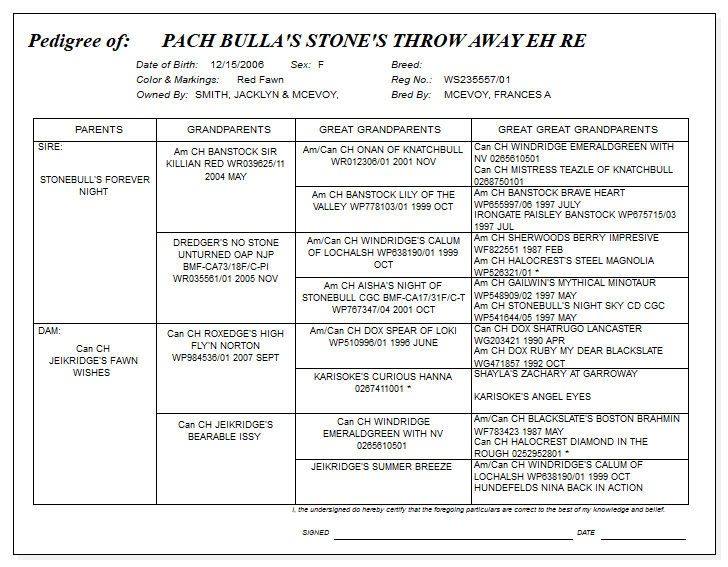 
“Neala” was our pick puppy from a litter of 8, sired by a puppy, StoneBull’s Forever Night, we’d sold to Frances McEvoy of Bulla Bullmastiffs in Ontario, Canada, bred to her bitch, Can. Ch. Jeikridge Fawn Wishes.  I was looking for a puppy with performance potential as a future replacement for Neala’s paternal grandmother, C-ATCH Dredger’s No Stone Unturned, CGC, OAP, NJP, “Rhea” (cover dog for the 2009 Bullmastiff Annual) in agility competition.  So, when the litter was 8 weeks old we went up to Canada, temperament tested the 8 of them, and Neala stood out as having excellent working dog potential.  She came back home with us to New Hampshire, started puppy agility classes the next night and the rest is history.

At maturity Neala stands 25 ½” and is a dark eyed, cleared coated red-fawn with a full black mask.  We never paid much attention to her weight as being an agility dog, she was always kept somewhat thin.  She has a solid topline, is balanced front and rear with moderate angulation and beautiful, flowing side movement as well as being clean coming and going.  Her preferred gait is always that gorgeous trot.  Her fault and why she never made it to the show ring, was her bite, rather undershot and with one bottom canine cocked out to the side.

She was started in the Canine Performance Events (CPE) agility venue at 20 months of age and earned her CPE Agility Trial Championship (C-ATCH) for the second time at age 7.  During this time, she started in AKC agility and finished the 2013 season as the #4 Bullmastiff with an invite to the AKC Agility Invitational in Orlando FL, where she finished 54th out of a field of 145 (all breeds) on her 7th birthday.  In 2014, she was ranked by the AKC as the #1 Bullmastiff.  Two days shy of her 9th birthday, she earned her PACH AKC agility title at American K-9 in Amherst NH, completing her final Jumpers run a full 13 seconds under course time.  We officially retired her from agility competition at the American Bullmastiff Agility Trial, also held at American K-9, in January of 2016, where she finished her final run to a standing ovation from fellow agility competitors after having spent over 7 years in the sport.

Neala took time off during her agility career to be bred twice.  The first time to GCH Briart’s Solar Storm of Tracabull, producing a litter of 16 puppies, with 15 surviving, and the second time to GCH Roxedge’s All Fired Up, producing a litter of 10.  The puppies produced that went on to competition performance events of their own, all inherited her incredible desire to work.

At the time we are writing this, Neala continues in good health, has earned her AKC Rally Novice title and is actively competing for her Rally Advanced title.  We’re even thinking about seeing if she’s interested in trying for an AKC Novice Obedience title.
​
Thank you Frances McEvoy for the opportunity to own this wonderfully talented and very special girl.