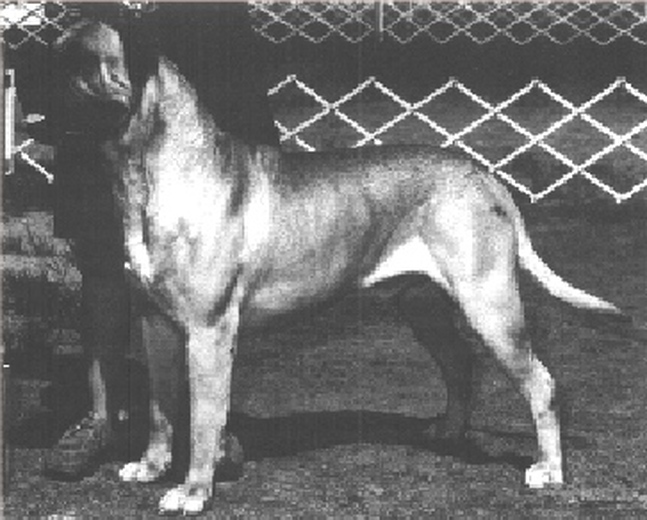 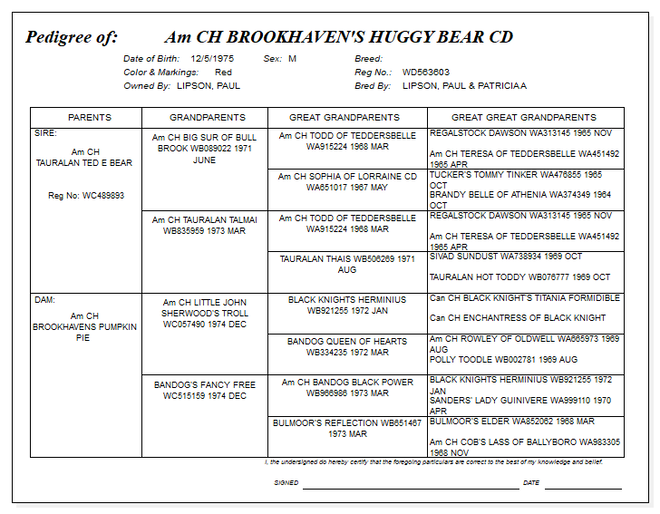 “Big Red” was whelped in December 5, 1975.  His adult height was 26 1/2 inches and he weighed 150 pounds.  Red was the result of an outcross breeding.  He possessed the best of both parents.  His exceptional movement came from his National Specialty winning dam, Ch. Brookhaven’s Pumpkin Pie, and his head, bone and substance from his Group placing sire, Ch. Tauralan Ted E. Bear.  Red was a Group winner and multi-Group placer before the Working Group was split (no small feat in those days).  He won Specialty supported shows in the East, Midwest, West and Far West, making him (to my knowledge) the most winning dual titlist in the breed.  Big Red is the foundation sire at Brookhaven, with all my dogs having Red in their pedigree and most having Red in their pedigree many times.  He is also found in all of Dan J’s pedigrees.  Red could be counted for throwing intelligent (he sired three Companion Dog titlists), sound moving, substantial Bullmastiffs with outstanding structure.  Perhaps the most important trait of many of his get has been their longevity.  Although statistics are not complete, it isn’t unusual for owners to report lifespans of ten to twelve years.  Sadly, while in excellent health at eight and one half years, he suffered a severe back injury and had to be euthanized.

By Paul Lipson of  Brookhaven Bullmastiffs, breeder and owner
Pat Lipson was co-breeder