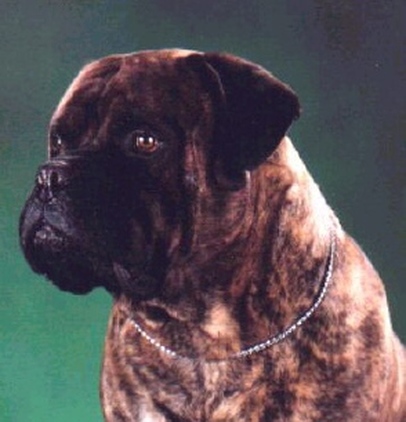 Ch. Brodmere Spirit Walker was awarded his majors in his first few shows as a young dog.  He then moved in with his beloved owner, Liz McKinney and enjoyed a long vacation from the confines of the show ring.  Mr. Woofus, as Liz called him, re-entered the conformation ring at the mature age of 6 and finished his championship in short order.  After attaining his Championship, Walker enjoyed life with Liz and the occasional Specialty Entry, where he won several Veteran awards as well as Stud Dog titles.  Upon, Liz’s untimely death in 2003, Walker went home to live with Brenda Campbell, his breeder and original owner.  Brenda lovingly cared for Walker and even though he lost his dear companion, Liz, he enjoyed a healthy, happy life until July of 2004.  Mr. Woofus-Walker, was a dark Red Brindle, of impressive size and substance, with a blocky, typey head, level topline, gentle loving temperament and eyes that truly were the window to his soul.  He attained his ROM status in two litters where he produced 6 champions.  Walker, at this time, is the only dog to have produced an All Breed Working Group winning, Brindle Bitch (CH. Kingslynne Spirit of Brodmere).  His get are stamped with his irrepressible good nature, his rock solid topline, square correct heads and sound movement.