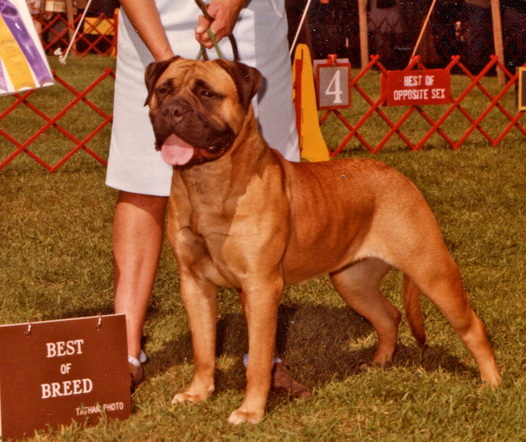 “Maskie’ was one of the twelve surviving puppies of the first litter produced by Ch. Bullstar Blackslate Hecuba and Ch. Wedgewood Valhalla. From this litter, Blackslate keep two bitches, Maskie and her sister, Ch. Blackslate’s Titania. “T.T.” was shown first. When Maskie was just over two years of age, she was sent to California to be bred to Ch. Tauralan Vic Torious. Immediately  upon her return we showed her in two shows that she had previously been entered in and she was winners bitch at both shows for two majors. After whelping her litter and weaning them at five weeks of age, she went Best of Breed over male specials. One would never of known she had a litter 10 weeks prior. Maskie was the dam of two Register of Merits from her first litter. In her fourth and last litter, sired by Ch. Tailwynde’s Sugar Ray, she produced Ch. Danrhonglyn’s Junior Walker. Her strong points were that she had outstanding pigmentation, and guard instincts, and was very sweet with her family and friends, including her handler, Gerlinde Hockla, otherwise she was indifferent towards strange adults.