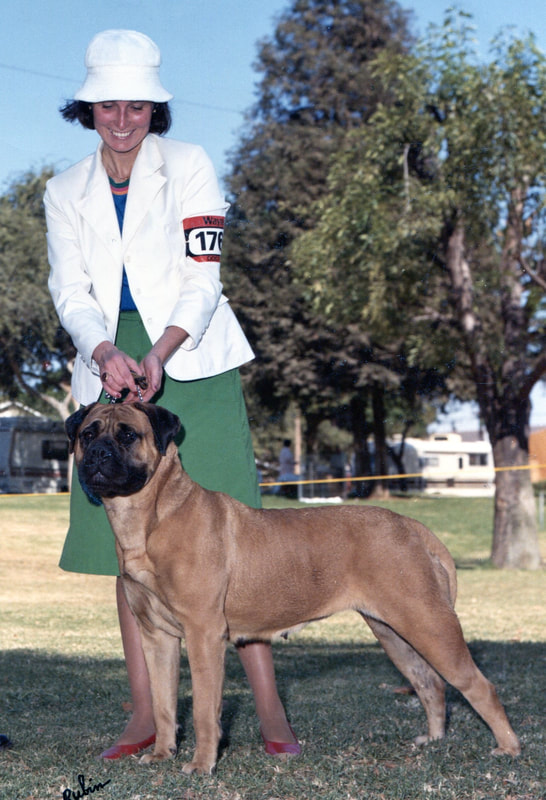 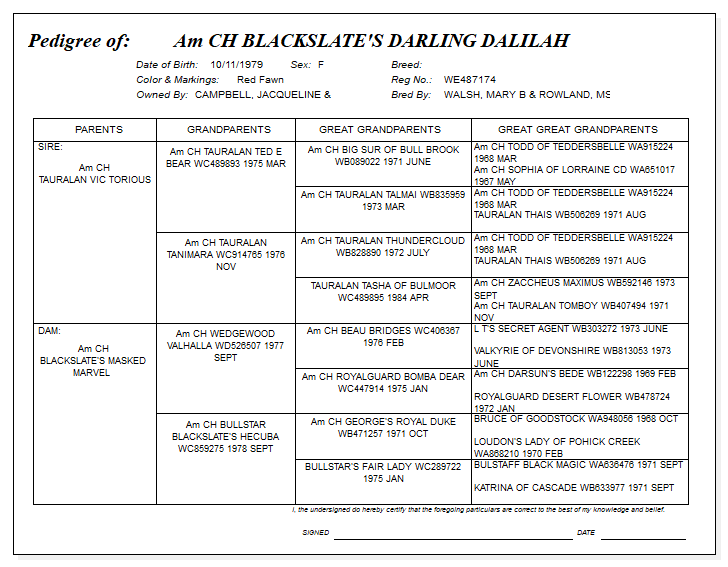 “Dalilah” was the litter sister of Ch. Blackslate’s Big Daddy Henry.  She was sold as a puppy to Dan and DaRhonda Gleason of Santa Rose, California.  While still owned by the Gleasons she finished her Championship in five shows.  Her most impressive win was at the 1981 ABA National Speciality and was awarded Winners Bitch, Best of Winners, and Best of Opposite Sex, handled by her breeder Mary B. Walsh.  She was also Best of Opposite Sex at the Far West Speciality the following year.  It was her litter sired by Ch. Tauralan Hold That Tiger, that produced the get she is best known for, from this litter six Champions finished including Ch. Blackslate’s Boston Blackie, Ch Tauralan Shana Tova, and Ch. Danrhonglyn’s Cinderella, all of whom have played prominent roles in different breedingprograms.  Dalilah was a carrier for longhairs and when bred to other carriers would produce one or two longhaired puppies, hence her litters out of Ch. Windy Hill’s Hannibal and Ch. Sir Winston’s Igor were not so successful.  Following the Gleasons divorce, Dalilah was sold to Jacqueline Campbell of Nevada who awarded her the love and attention she deserved. Dalilah outside the show ring did not really look that impressive.  In fact, she never took a picture that did her justice.  In the ring, she displayed a special personality and sparkle that contributed to her impressive show career.  She was shown at a time when few bitches were considered for Breed and to her credit had many Breed wins.  She was handled to the majority of her wins by Sheila Farrington Polk.  She was of good size, probably 25 inches at the shoulder with excellent muscle development from both front and rear and a level back.  She was red with her dam’s beautiful pigmentation.  She had a scissors bite.
By Virginia Rowland of Blackslate Kennels,
Delilah
b. 10/11/1979, died unknown
​bred by Blackslate's Kennels
WE487174 SB - Oct 1981 Female, Red Fawn
Progeny points: 4.  Level: Bronze: Status: ainactive
Sire:  CH Sir Winston’s Igor    Whelped:  5/16/1981
CH Danrhonglyn’s Lady Sheba CD  (WE878704)    ​F   Red Fawn   (Maresca)
Danrhonglyn’s Dazzlin Darla  (WE970058)  ​F   Red    OFA # BMF-447
Danrhonglyn’s Fireside  (WF015558)    M  Red
Tempting Tanya  (WF064917)    F   Red   (McNulty)