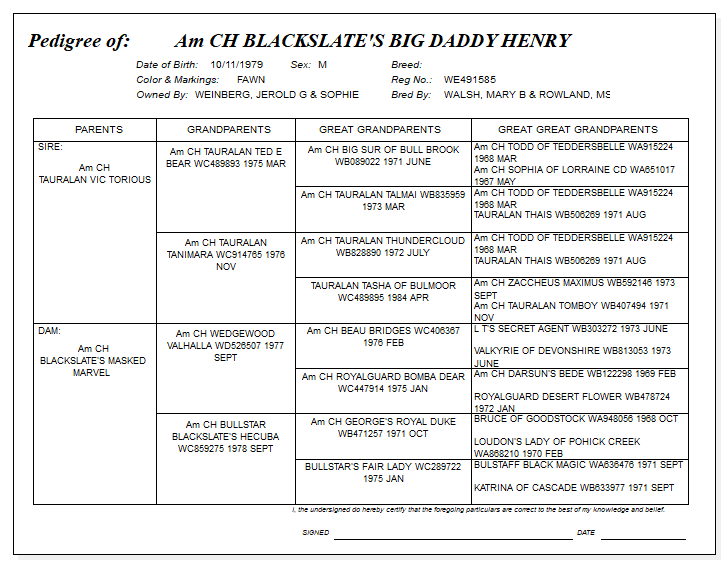 “Henry” was one of a litter out of Ch. Blackslates Masked Marvel and Ch. Tauralan Vic Torious. As a little puppy, he was called “peanut” because he was half the size of her other puppies. It was speculated that he had been too close in the uterus to other puppies and had not received as much nutrition. By eight weeks of age, Henry was the widest and squarest puppy in the litter with a remarkably blocky head. For all intents and purposes, he caught up size wise to his litter mates. Henry was sold to Jerry and Sophia Weinberg of Chelsa, Massachusetts. He lived with them in a small ground floor apartment that afforded him access to a large yard. The Weinbergs always felt that Henry was capable of great achievements, and indeed he was. As a puppy he was Reserve Winners Dog at the ABA National Speciality, and later was Winners Dog at the Greater New York Bullmastiff Fanciers  Speciality. He was bred only on a limited basis but his get included: Ch. Sunny Brook’s Sweet Sarah who was the first bitch to win a National Speciality in 25 years and Blackslates Chimney Sweep ROM.
Henry had a particularly beautiful head which was used in the Molosser Magazine as the example  of the Bullmastiff. His life was touched by tragedy. At three years of age he got glaucoma in one eye and had to have it removed. At five years of age, he died of complications from a diaphragmatic hernia which apparently he had since birth. Henry inherited his dam’s temperament. He loved his family, particularly the children, but did not like strangers
​     written by Virginia Rowland
​Henry
WE491585 SB-12-81.  Male, Fawn,  OFA # 402
bred by Virginia Rowland and Mary Barbara Walsh     owned by Jerold & Sophie Weinberg
Progeny points: 6   Level: Copper: Status: inactive, updated 2012
Dam: CH Blackslate’s Titania Whelped: 7/20/1981
CH Blackslate’s Moth (WE962990) F Fawn (Tackett & Rowland)
CH Toby Of Blackslate (WF136445) M Fawn (Smith, Walsh & Rowland) OFA # BMF-449
​
Dam: Gad Hills Flora Finching  Whelped: 9/26/1981
CH Gad Hill’s Dolly Varden II  (WE991852)​F Fawn (Van Zantwyck)
Houghtalings Bumper Crop (WF181288) ​M Fawn​
​
Dam: Lady Tiffany Of On-Guard   Whelped: 5/10/1982
CH Sunny Brook’s Sweet Sara (WF260270) ​F Red Fawn (Rowland, Freedman& Walsh)
​
Dam: Naughty Girl Of The Bush Whelped: 11/26/1982
Big Daddys Little Girl (WF423921) F Fawn (Fredette)