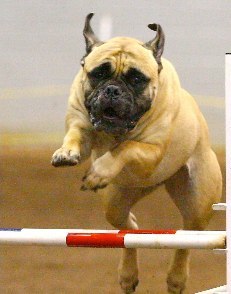 Desi just loved life, was always happy and wanted to do everything from the time  she could crawl. Agility was our favorite sport and she jumped at championship height. She learned many tricks and did dance routines too. At her last national specialty instead of a courtesy turn I had Desi spin, and after her down and back she took a bow.
A smart dog, Desi scored a perfect 100 in Rally Advance and had two legs on her CD. We would have won many more titles in agility except she, because of me celebrating to early, crashed the last jump numerous times. As a free stacking show dog Desi went BOS sweeps and WB at specialties and her brother Zak won the sweeps and Best of Winners. At the Greater New York Specialty Desi brought home BOS with a hugh entry of champion bitches.
Desi was the best mother ever to two beautiful litters who were sired by Canadian dogs. She nursed her puppies until they went to their homes and I didn’t even need to wean them until they were five weeks old. She passed on her happy personality and desire to please. Desi’s type was passed to her puppies with her beautiful head, perfect bite, level topline, and short, square back. The girls,
although not as small as she was (just 22 inches), were small too.
One day just two days after an agility trial Desi didn’t eat dinner. Desi never missed a meal so I knew something was wrong and rushed her to the vet. Nothing definitive showed up but when she didn’t eat next morning I rushed her back thinking she may have an obstruction. The barium x-rays showed something not right. Exploratory surgery did not reveal on obstruction or anything else wrong. She died of an embolism in the car a few hours later on the way to spend the night at my vet. She was only five years old. I can remember that moment like it happened today and still mourn her loss.