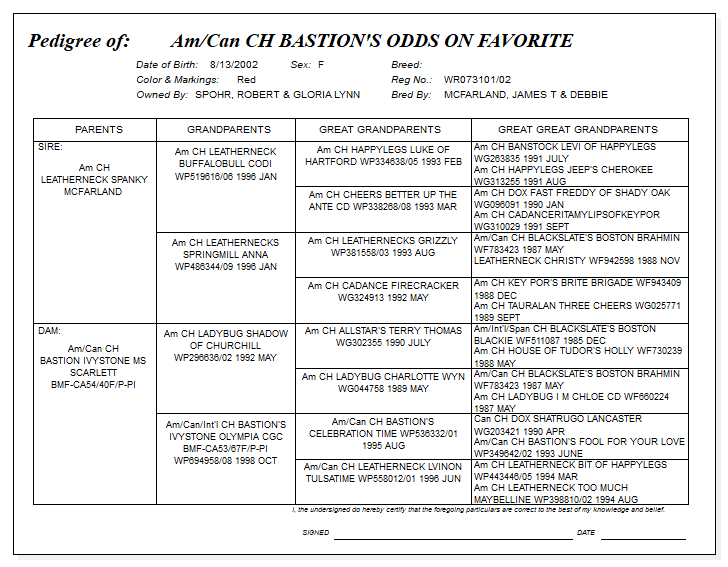 Pumpkin
By Bob And Lynn Spohr
While trying to pick the girl we wanted to carry on from Scarlett’s litter we were over-whelmed by the choices regarding the redheaded girls. There were three that were clones of each other at 7 weeks. We chose Pumpkin. Sherry Boldt chose Bella and Chris Coggin took Simone. Pumpkin brought us a personality that could best be described as Earth Mother. She loves her babies, her sisters babies , the neighbors babies. She will tend, clean and raise them all. Ruling with a firm but gentle paw she tolerates all four and two legged people in her life. She was and is my husbands girl.

Her lovely headpiece has been passed on to many of  her eleven children. A bit of a sloping croup is her major fault in my mind. We have line bred her twice producing  a BIS BISS daughter. and a BIS son.  In her litter to Liam (A/C Ch. Bastion’s Music in the Glen BIS BISS) we received a abundance of typey clean honest moving daughters. Gyspy is a foundation lady  for Evertru and Marilyn DeCair. Savanna is carrying forth in the performance ring with Kim Cook. Lyric is added to the breeding program of Bramstoke Bullmastiffs in Canada. Kay Reil also has the honor of training and raising the WB/BW, at the 2006 National Speciality, FiFi, also from this litter.

The third litter at the time of this writing is only 7 months old but hope run high. There were only 2 in this litter but at this point they are lovely. Pumpkin was spayed after her third litter having done her bit. She will always be a cherished member of our family.