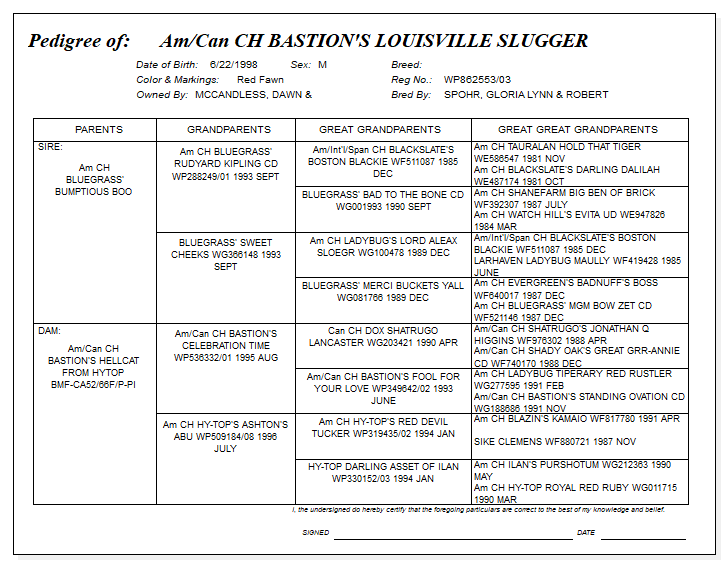 If ever a dog owned the earth that he stood on, it was Louie. He was at all times in full charge of his world, never needing encouragement to produce that confident and self assured demeanor that he always displayed. Louie, more formally known as BIS BISS Can. Am. Int. Ch Bastions Louisville Slugger RN, was the epitome of power and strength in a compact package. He had a wonderful ability to use every single bit of himself in order to power around a ring. Like a well developed athlete, he always pushed himself to the max to achieve an effective ground covering stride while holding a solid back.

With a beautiful square head and perhaps one of the most perfect bites that we have ever seen in a Bullmastiff, he was both captivating and essentially a true working representative of the breed. While not the tallest of boys, he was thick, substantial, deep-chested, muscular and heavy boned,: a commanding dog with an absolutely sound, even temperament. Regardless of the situation, Louie responded with verve and energy, and a dynamic presence that could not be denied. He captured multiple Best in Shows, several specialty BIS, in both Canada and the United States .Louie is one of only three Bullmastiffs to have won Best in Shows in both Canada and the United States. He returned home to Arizona after making his mark in Bullmastiff history, and has become an outstanding ambassador for the Bullmastiff breed

Looking back to Louie as a youngster, he won Best in Sweepstakes and Best Puppy at the tender age of nine months at the Southwest Bullmastiff Club Specialty, on the way to his championship by eleven months. He won his class in both Futurity and Sweepstakes at the 1999 ABA Nationals. Louie was awarded V-1’s on three consecutive days, three group ones and two Best in Shows, while earning his Inter-national championship. He finished his Canadian championship in roughly twenty-four hours. At this point in Louie’s life, We agreed with Dawn to join forces and we gave this boy a shot at the top. He exceeded our wildest dreams. In 2002, while winning Best of Breed at Westminster and the AKC Eukanuba dog show , he was number one in the US, in all systems and a Nationally ranked Top Ten Working dog. He added to this achievement by attaining the number one spot and multi BIS BISS in Canada as well as being a Top 5 working dog.

One of our fondest memories of him was when he won the National Triathlon with Dawn. He has such a broad range of abilities and talents as a working dog should. He tends to stamp his wonderful head-piece and his love of life on his children. Being a product of an outcross he produces the diversity of his pedigree. Louie as a veteran is still a dog to make people stop and look. He lived with his primary owners, Dawn Hamilton and her son Royce in the warmth of Arizona. He lived to be almost 12 years of age and his mind and will were always there, his body failed him and he left us with Dawn at his side. Longevity is strong here. His mother was over 13 years when we lost her. Again, harp as a tack till the very end. Our thanks to all who were part of making this dogs amazing career happen. Dawn, of course, his American handler, Erin Roberts ; and his Canadian handler Pam McClintock who also helped me portray Louie in the medium of words. Bob and I are thrilled to have bred this boy as well as being part of his specials career.