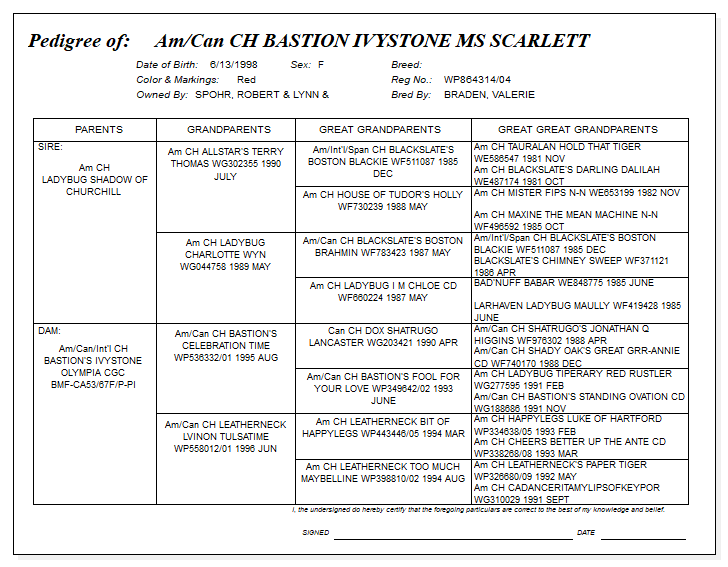 A/C CH Bastion's Ivystone Miss Scarlett BROM
​b. June 13 1998 died Aug 3 2005
Call Name: Scarlett WP864314/04, SB:Nov 2001
Red, OFA:EL-615, CA-54  PennHip .46/.42
Bob and Lynn Spohr, owners
Bred by Valerie Braden & Bob and Lynn Spohr
Progeny Points: 8.  Level: Bronze Status - inactive & awarded 2009, updated 2012
Miss Scarlett is a red head that stole my husbands heart very early in her life and has keep it. She reached 24 inches and 100 pounds as a adult. Out of a litter of four, we kept two, Scarlett and her sister Emma. I had my heart set on the brindle and Scarlett already owned Bob. We were fortuitate to have our friend Valerie Braden allow us to keep one as a co-own and one as solely ours. Both sisters are A/C Ch, clear on hips and elbows, cardiac and kidney. Scarlett possessesd type and attitude. She passed this on to her get no matter who she was bred too. She has two litters to her credit. First was to Cutter, (A/C Ch. Bastion’s Cookie Cutter) a Poppy/Mag son. The second breeding was on a co-own with Jim and Debbie McFarland and Ch, Leatherneck’s Spanky McFarland was the sire of choice. We split the litter and then Scarlett was returned home to us. She did miss Jim’s lap at times and was very happy to see her extended family when ever the McFarlands happen to be here. From these litters we have had several daughters that have gone on to be the cornerstone of different breeding programs.

Scarlett was retired after her second litter, having provided us with her legacy. We are most proud of her structure and temperament. This seems to be coming down through the generations Since the first writing of this we have lost our friends and co-owner’s of Scarlett, Debbie and Jim McFarland. Scarlett left us a legacy in her beautiful daughters. Pumpkin , Simone, Mira and Bella . These girls have produced the next generation. Scarlett would be very  proud of her children and her grandchildren if she was still with us.