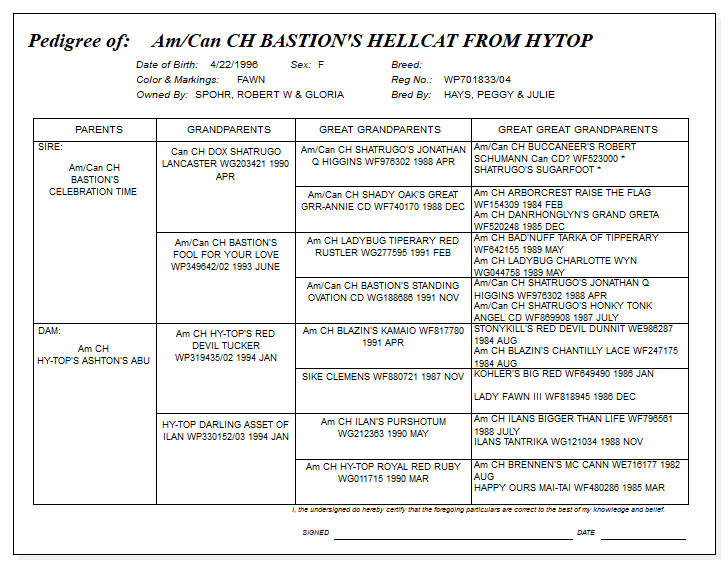 A/C Ch Bastion's Hellcat from HyTops
​born 4-22-1996, died Feb. 10 2008
​Owned by Lynn & Bob Spohr of Bastion Bullmastiffs.   Bred by Peggy & Julie Hays
Call Name: Essie   WP701833/04.  Fawn Female, OFA 2052F,  CA-52, CERF-202, EL 415
Progeny Points: 9, Bronze   Level: Bronze Status - inactive, awarded 2009, update 2012
“Essie Mae” was a middle of the standard fawn bitch weighing about 110 pounds. This girl possessed lots of bone, attitude, athleticism, showmanship and type. She has a passion for life that made her a challenge to live with.. If she wants out of a crate, she gets out... If she wants on the other side of the fence - She jumps it.. If that white donkey should not be on her farm - She chases it off. She was the supreme mole huntress, bringing the dead moles to me for praise. Essie possessed a great deal of mothering instinct. She tended to her babies with a passion. She produced very consistent litters whether she was line bred or out crossed. She throws her level bite, exceptional amount and color of pigment and wonderful attitude, which consists of a blend of permanent puppyness and determination. Her children received this ability to explore life with a passion. At almost 8 months she gartered 14 points and was a American Canadian champion by 1.5 years. Her Canadian championship included taking Best of Opposite from the classes at the Canadian National. That  same year she received an Award of Merit at the American National in St. Louis under breeder judge Helma Weeks. Essie lived to 13 years of age and ran this place till the day we lost her to bloat. She left a hole in our  hearts when she passed.
​     by Lynn Spohr of Bastion Bullmastiffs