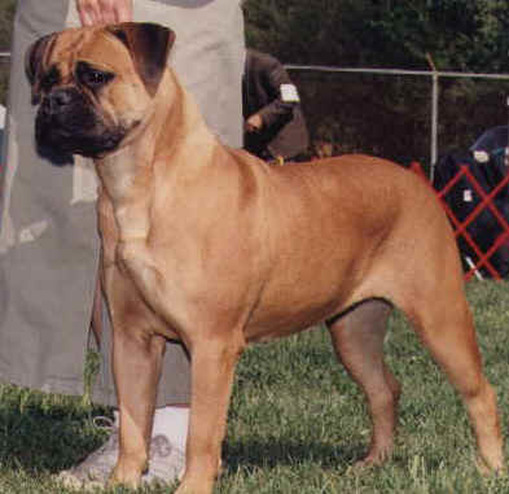 ​Call Name: Destiny
WP853026/01 SB - Nov 1999
Female, Red, PennHip .46/.43
23 3/4 in 103 lbs
​
Progeny points: 5,   Status: Copper
​Level: Copper: Status: inactive, updated 2012
Destiny came to live with me from Sommerset England in February of 1998. Since that day she has been
entertaining me with her comical antics. She is the foundation of Southwind Bullmastiffs. Destiny is a well
muscled, stocky red bitch with lovely movement. Her bite is broad and slightly undershot. Standing only 23 3/4
inches, she weighs 100 lbs. She has good bone and a wonderful correct shoulder layback, which she has passed
on to her get. She finished her American and Canadian Championships by the time she was 18 months old. She
placed third in the Brood Bitch Class at the ABA 2000 Nationals. She is the first Bullmastiff to obtain a Drafting
title.
Destiny produced 3 lovely litters for me which include 2001 Best Of Opposite Sex at Westminster and
Top Winning Bitch for 2001, A/C Ch Southwind Witchy Woman, GNYBF and DVBC Supported entry Winners
Bitch 2002, A/C Ch Southwind Sweet Home Alabama, 2003 Connecticut River Working Group Association
Award of Merit Winner Ch Southwind In A NY Minute and 2002 # 2 Bullmastiff in Brazil, Brazilian Ch. Southwind
Just The Way You Are.
Destiny is an exceptional dog in every way. She has far exceeded my expectations of her with the stunning
animals she has produced and her wonderful grandchildren including Ch Maxim’s Hazl, an Award of Merit
winning bitch at the 2003 Nationals and Southwind Ambush In The Night, 2006 AKC ACE Award Honorable
Mention in Serive Work.
In 2002 Destiny received a Top Producing Dam award from the American Bullmastiff Association. At
almost 9 years old, she is still full of life and ready for anything. Currently she is working on her obedience
title!
​
Submitted by Nicole Jill Parker ~ Southwind Bullmastiffs, owner