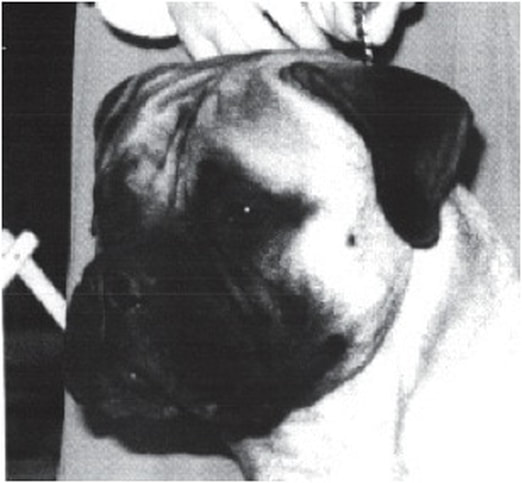 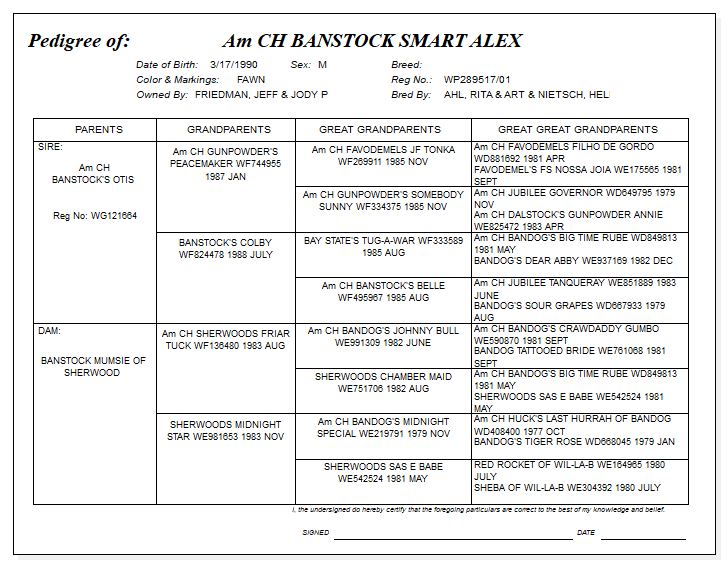 bred by Rita & Art Ahl and Helene Nietsch  Owned by Jeff & Jody Friedman
WP289517/01 SB 4/92  Fawn, Male, 25 in, 125 lbs
born 3/17/1990 Died: unknown   COPPER, 10 points, inactive and updated 2012
​
“Alex” was born on March 17, 1990, and is a clear fawn dog, with beautiful black pigment, black eyes, nails, and ears. He is about 25-1/2 tall, about 125 pounds. Alex has a lovely clean head, a level mouth, very clean, dry mouth (not flewy). He is a very compact dog, moderate in size and breadth, moderately angulated, and moves well. He is a “Johnny Bull” type, a type that I particularly love and which I think represents true type (compact, square, clean). Structurally he has a strong front, good rear, level topline, and good feet. His temperament is very stable and predictable, but he is a very protective dog, with sharp, keen instincts, but not necessarily dog aggressive, however. Alex was bred to two good size champion bitches, and produced a lot of the qualities he possessed himself. One of the bitches was over 26” and they produced dogs in the middle and top of the standards, but were similar in type. The other bitch, not as big, but within the standard in height, and very substantial, produced smaller, but within the standard size offspring, and also had a very similar type to Alex. One of his offpsring was Best Dog in Futurity at the first ABA Futurity in 1993, and his litter sister won her class at the same Futurity. Thus far, Alex has had absolutely no health problems (chronic or intermittent) at the age of four. Both of his parents are still alive and healthy at ages 6 and 8.