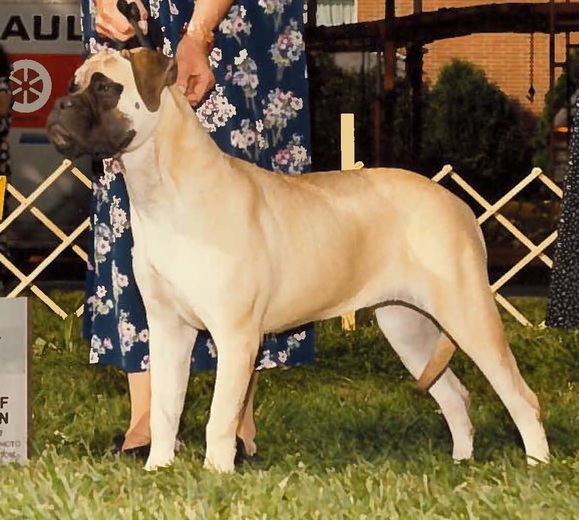 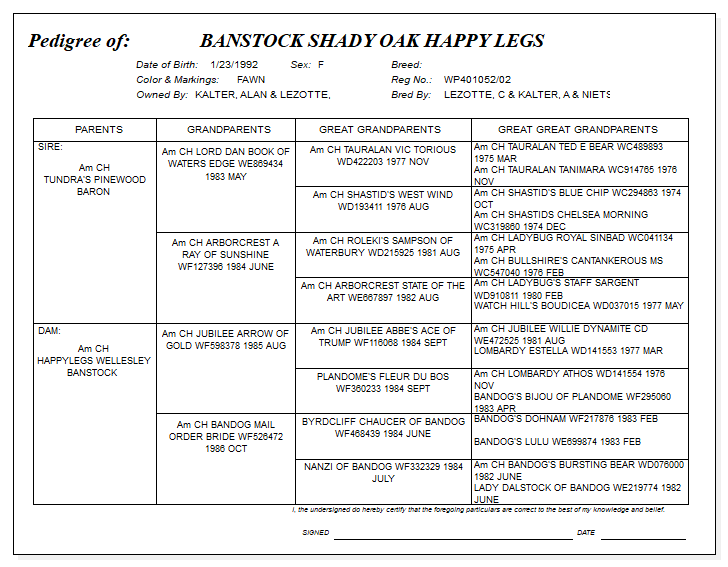 WP401052/02  SB 4-94  Fawn Female,   23.5 in, 110 lbs
Progeny Points: 5   Level: Copper  Status - inactive, updated 2012
Breeder:Chris Lezotte, Alan Kalter & Helene Nietsch
Owner: Pam Kochuba &Helene Nietsch
“Pillar” is a striking clear biscuit fawn bitch, about 23-1/2”, 110 pounds, with a beautiful black mask.  She has a lovely head, and seems to throw it in her offspring.  Pillar was the last offspring of both Ch. Tundra’s Pinewood Baron  BISS ROM and Ch. HappyLegs Wellesley Banstock. There were only two pups in the litter, one fawn and one brindle.  The brindle litter sister (Banstock Paige of Shady Oak) is the dam of  the current #1 Bullmastiff and BIS and BISS, Ch. Avonlea Storybook Goodfella.  Pillar was bred twice, both times she had large litters, whelped naturally, was a good mother, and had plenty of milk to support the litters.  She seems to pass on to her daughters the tendency to have large litters, as three of them have had 14 pup litters.  Another trait she passed on to her offspring was extremely heavy hindquarters, with very thick hams.  Pillar was never shown, as when she was very young she broke her leg and it did not heal correctly and she tended to stand with one leg slightly shorter looking than the other, otherwise she would have surely been a champion.  She was shown only once at the National Specialty as a pup and placed second in her futurity and regular class in a very large class (over 30).  To this point she has had no health problems.