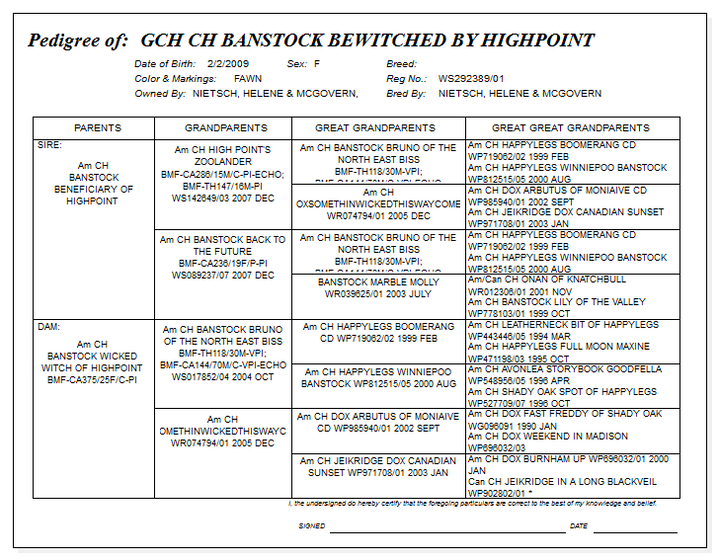 Clover has been one of the most special dogs I have ever owned. Right from the start, she surprised me in everything she did. She was the pick puppy bitch in the litter, and it was her silhouette one evening that made me decide to keep her, just a shadow of her outline
took my breath away. She was a high energy, prey-driven puppy. If I threw a toy across the room, I could exhaust myself as she would never stop retrieving the toy and bringing it back to me. This might have been my first indication of her high drive. As a young dog,
she scaled my five foot fence to chase a few deer that ended up in my yard. If she smelled a fox or sensed a deer on the other side of the fence, she went into prey mode! This prompted me to increase the fencing to six-foot chain link! She went best puppy in match at only 16 weeks against some stiff competition. At her  first show at only six months, she got her first point and best of winners. She was undefeated in the classes (at several specialties and with a couple of breed wins over specials) except for the national when at eight months she won both her classes. Although not campaigned, she did end up in the top 20 all-breed with multiple group placings and specialty wins.

A big girl, 25” and 120 pounds, with her high energy, she always impressed me with the way she showed. She matured into the same silhouette she was as a puppy, defined muscle, strong topline, complimentary correct angles, pro-sternum, rib spring and a lovely neck, good bone, great pigment. She went into the ring to win it and even as a young girl, stood like a pro and moved powerful and effortless. Her silhouette is outstanding, and even my children remarked that she looks like a stallion when she is on guard in the back yard.
She is an exceptional guard dog, totally bomb-proof and good with my other dogs and even the cat (although she did chase the cat … the cat always survived!). As a guard dog she was fearless and discerning and I know that she would protect me with her life! She
loves her family and friends and although she didn’t grow up with small children, loves being around them, especially my young grandchildren.

I was again surprised when I bred her, as I thought as an alpha bitch she would not tolerate a dog to mount her. But she surprised me again and was totally cooperative in the breedings. Again, I thought when the puppies squeaked, she’d want to grab one and bring
it to me. She became the best mother any bitch could be, kept her puppies spotless and never left them for three weeks, and I even had to separate her from them as they got older as she loved playing (all too rough) with her babies. I think that with all three breedings Clover has produced the best of the qualities of both her and the sires. I am very impressed with the type and soundness of her puppies, not perfect, but each with numerous outstanding quality, some already with notable wins in the  show ring! I don’t use the term “heart dog” frequently, and over the years have had a few, but Clover will always be at the top of that list!
​
written by Helene Nietsch
F, Fawn, DOB 2/2/2009,  Reg # WS292389/01, SB 11/2011,
​OFA # BMF-4057F26F-PI
Owners:  Helene Nietsch, Michele & Mike McGovern & Dale Stammel
Breeders:  Helene Nietsch, Michele & Mike McGovern
BRONZE LEVEL: 8 points
Sire:  Pi-Et-Ra Zebulon “Of Trefilio”    Whelped:  7/15/2011   Litter # WS382893
CH Banstock N Highpoint No Shrinking Violet  (01) F   Fawn   (Nietsch & McGovern)
​CH Banstock’s Leading Man Of Regency  (02)  M  Fawn   (Bateman)​
CH Banstock Lily Of Highpoint  (03)  F   Fawn   (Flanders)
​     OFA # BMF-4369F32F-VPI
​Banstock Ajax The Great At Highpoint  (05)  M  Fawn
​Banstock Zara Of Highpoint  (06)  F   Fawn  (Read)
Banstock Brody Boyz Dream  (07)  M  Fawn
​Banstock Liberty Bell Of Lagratitude  (08)  F   Fawn
​Highpoint N-Banstock’s Home Brew  (09)   M  Fawn
​Banstock N’Highpoint Mr Mojo Risin  (10)     M  Fawn