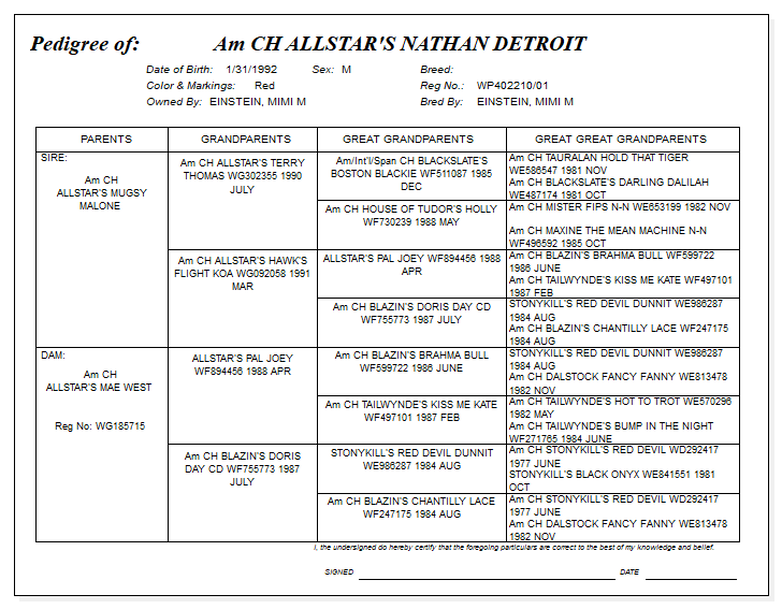 Ned was born on January 31, 1992, a part of the first of what would become many great litters sired by Mugsy.  He was deep red, had wonderful type, was top of the standard in size, and was very sound with an outstanding temperament.  He began his show career at the Greater New York Specialty in June, 1993 where he was Best in Sweepstakes and Best of Winners for a 5 point major.  He finished his championship very quickly that summer, actually too quickly to really get adequately trained, and stayed home to continue maturing.  He was the consummate adolescent in all regards.
We did decide, however, to enter him at Westminster in the hope that by February, 1994, he’d have filled out and settled down.   So, the Garden was his first outing as a special.  He had indeed matured a bit physically but was still very high energy and a complete handful.  Somehow, although I think it took every ounce of strength, Jane Hobson was able to contain him and he absolutely lit up the ring.  Although he came to the Garden with no reputation, having never been seen as a special, he could not be denied and was awarded Best of Breed.  I’ve never before or after, had a dog of mine perform quite as he did that day.  It was truly a joy to see.
What began as such a promising show career ended when he injured a hind leg and was never 100% sound again.  He lived the rest of his life at Allstar where he was well loved and an important part of a wonderful, extended, bullmastiff family.
by Mimi Einstein, owner and breeder
bred and owned by Mimi Einstein
b. Jan. 31 1992.  Call Name: Ned,   Red, Male
WP402210/01 SB-4/1994
DAM: Allstar’s Gracie Allen , Whelped: 12/18/1993 Litter # WP528681
Allstar’s Nigel Potter (01) D Red
Allstar’s Sir Charles (02) D Red
Allstar’s Buffalo Bull Cody (03) D Red
Allstar’s James Bond (04) D Red
Allstar’s Buster Keaton (05) D Red
Allstar’s Isaac Jaycasey (06) D Red
Allstar’s Jamie Francesca (07) B Red
Allstar’s Kona Marona Mae (08) D Red
Allstar’s Chief Sachem (09) D Red
Allstar’s Oprah (10) B Red
Allstar’s Ron Howard (11) D Red Fawn
Allstar’s Barnabys (13) D Red
​
DAM: CH Allstar’s Golden Girl Whelped: 2/19/1994 Litter # WP567631​
Watch Me Win-Throp (02) D Red
Watch Me Frankie Boy (03) D Red Fawn